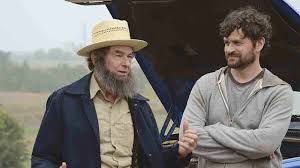 Rachel Troyler loves being a police officer in the small town of Sugarcreek, Ohio, but she still carries emotional baggage from past hurts.  That’s why she suspicious of a stranger who comes to town with a broken down truck and a sick son.  She becomes protective of her Amish aunts when they decide to take the man and his son in at no charge except for repairs to their dilapidated inn.  Rachel senses that there is something more to the stranger than meets the eye, and she is right.  Little does she know that she is caught in the middle of a high-stakes mystery involving top sports figures.  Yet despite her suspicions and self-protection, she finds herself falling for the mysterious runaway.

One consolation to this film is that the production is not terrible.  It is actually quite decent—the editing is professional and the camera work shows skill.  There are no glaring errors related to sound and video quality.  The main caveats to point out here are the cheap and limited sets, so it seems like the crew did the best they could with what they had.  Overall, the production is above average, but not perfect.

Does this really have to be a romance?  The plot seems to work well as an average mystery.  Just because a fleeing athlete comes to town doesn’t mean that a local female police officer has to fall in love with him.  One breath of fresh air that this movie brings to the scene is a plot that includes Amish characters that don’t shun anyone or get shunned.  Surprisingly, most of the characters have some depth to them when it comes to their motivations and behaviors—many of them are authentic.  But unfortunately, the dialogue is just regular and the villain is very cheesy.  As previously mentioned, the mystery is just average but it seems like the most of made of it.  There are no real twists and turns—those looking for a straightforward Christian movie will find it here.  Overall, there are not overly negative elements in Love Finds You in Sugarcreek, but there are neither enough elements to make it truly creative.

Amish acting often comes off as stereotypical, but Sugarcreek tends to avoid these issues.  Overall, the cast is professional and seems to be semi-coached.  But at the same time, the lines and emotional delivery are a tad dry.  It’s already been said in this review, but the theme must be continued—the acting in this film is just average.

It is fitting that Sugarcreek receives a final score of five out of ten, a clean average score.  Box Office Revolution anticipated a much worse rating from any film associated with the stodgy yet empty novel saga Love Inspired.  The best was done with what was offered in this film, and it can stand as an example of how to make the best possible ‘Love Finds You’ movie.  But at the same time, we must still request that more diverse movies be contributed to the Christian movie scene.

One thought on “Love Finds You in Sugarcreek (Movie Review)”