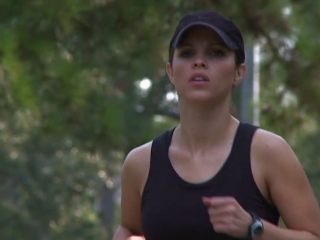 Since Kim does not live the way her strict and legalistic parents want her to live, she jumps at the chance to get out from under their thumb and takes her dream business job as soon as she graduates from college.  She thinks she has it made in life, especially when she meets her dream boyfriend.  She decides to take up running as a hobby.  However, all is not well as she becomes pregnant and her job is threatened by this.  Her family turns on her, except for her New Age-obsessed Aunt Sally.  She will have to decide what she is going to do with her unborn child before it’s too late.

When you watch a horrible production like Running Inside Out, you wonder what standards PureFlix has for carrying a film.  This film has terrible camera work, with constant cuts and transitions that make for a dizzying experience.  Video quality is also grainy, and audio quality does not meet standard.  The soundtrack is sub-par.  Sets and locations are also quite poor, including several poorly filmed outside scenes.  As previously mentioned, the editing is horrific and confusing.  We understand the constraints of a limited budget, but we have seen more done with the amount of money allotted to this film.  Also, if the budget isn’t there, maybe you should reconsider if you’re supposed to make the film yet or not.

Similar to other social issue films, Running Inside Out carries an important pro-life message packed in a ridiculous fashion.  Though the situations characters find themselves in are realistic, it is difficult to connect with them as real people since they come off as empty and wooden due to poorly written dialogue.  Some characters, most notably Aunt Sally, are extremely bizarre and eccentric for no particular reason.  Also, as previously mentioned, the story is hard to follow as it jumps from one thing to the next.  While there are some attempts at good here, there is just too much bad that detracts from it.  It’s disappointing to see this type of idea go to waste.

Unfortunately, this cast reflects the eccentrically-crafted characters therein.  Some cast members act off-the-wall most of the time, and all of them are one-dimensional in their deliveries.  Sometimes it seems like they are putting forth a half-effort.  It’s possible that coaching could have improved this group, as there is some potential here.  But as it is, it’s simply not enough.

We have seen a lot of low-budget efforts in our times as reviewers, yet some film makers seem to be able to do better with less than some do with more.  We maintain that if you have a solid plot idea, the money will be there and will be enough to put you on the map—just look at the Kendrick brothers as an example.  If God wants you to make a film, all will be provided for.  We wonder sometimes if movies like Running Inside Out have been forced to happen just because.  Thus, the end result is not good.  Hopefully this team and others will learn from the mistakes of this film.

2 thoughts on “Running Inside Out (Movie Review)”