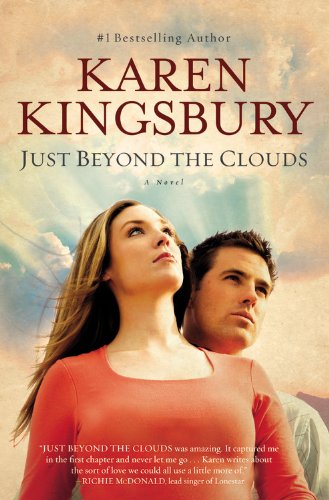 Karen Kingsbury’s book A Thousand Tomorrows was so well received that she made the decision to create Just Beyond the Clouds, the final book in her widely read The Cody Gunner Series. It is my opinion that this is the best book in the series, as it expands beyond the typical Christian romance novel to focus on how life challenges and broken family life can affect relationships. Just Beyond the Clouds deals with subjects such as adults with Down Syndrome, broken families, relationships, love, God’s forgiveness, healing, redemption, life challenges, and hope. The novel opens by introducing a new character in the series; Elle Dalton. Elle is a young woman who has obeyed God’s call on her life to train and teach young adults with Down Syndrome to live independent lives, an idea that seems radical to many of her peers. One of her students is her sister, Daisy. Elle is very protective of Daisy and at times does not want her sister to be independent, even though this is what she teaches others to do. Elle has recently gone through the difficult experience of having a serious relationship end in heartbreak, on the day that her wedding was supposed to occur. This experience has left her insecure and confused as to why God would allow such a thing to happen. Cody Gunner has just returned home from the bull riding circuit to discover that his parents have been allowing his brother, Carl Joseph, to attend Elle’s independence classes. Infuriated at his parents, he volunteers to take his brother to class one day….and meets Elle. In spite of himself he has to admit that Elle’s work with Carl Joseph has produced considerable improvement. Drawn together by Providence, and shared heartbreak, Elle and Cody find solace in one another’s company. However, they must learn that there is more to a relationship than romance, and that their siblings are not the most important part of their lives; God is. Will Elle and Cody move beyond attraction to commitment? Will they put aside their bitterness towards God and ask His forgiveness? To answer these questions, read the book!;) Just Beyond the Clouds would make a good standalone film. In the hands of the right writer/director/producer, it could be great. The secret to bringing Karen Kingsbury’s novels to the big screen is to take her ideas and bring out their full potential. In fact, I believe that someone could discover the full potential of many of her novels by making them into movies.