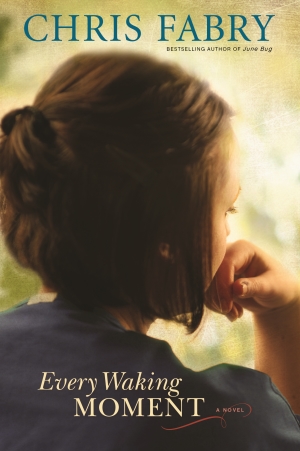 Chris Fabry has written many excellent Christian novels, and has many faithful readers that continue to look forward to each new novel he produces. Perhaps his best novel is titled Every Waking Moment; this book has always been my favorite by him, as it takes a unique look at life and the consequences of what happens when someone makes the decision to value material things above human life. Every Waking Moment deals with subjects such as medical experimentation, pharmaceutical companies, power, prestige, defeat, secrets, lies, consequences, pain, anger, forgiveness, truth, reconciliation, and the healing power of God’s unfailing love. The opening chapters of Every Waking Moment introduce the reader to the main character, a young woman named Treha Langsam. Treha has suffered all her life from a brain disorder that could have been prevented; in spite of this fact, she has managed to live a full, if somewhat simple, life. Her disorder has isolated her from society, and, with no family to call her own, she lives alone. Treha works and nearly lives at the Desert Gardens Retirement Home, finding fulfillment through serving the elderly during the last chapter in their lives. For as long as Treha can remember she has been able to feel little to no emotion, and lives in the comfort of routine and familiarity. She does not clearly remember her past, and is content with things remaining the same for as long as she lives. However, little does she know that her life of routine will be broken, and soon. The director of the retirement home, Miriam Howard, is one of the few people who have recognized Treha as more than just another employee. Miriam has witnessed on multiple occasions the gift that Providence has bestowed upon Treha, the ability to reach people who are lost in the confusing world of dementia. Somehow she is able to touch them in a way that improves their quality of life. Maybe its because of her own struggle, or maybe she has a depth of understanding not granted to everyone. In the midst of the everyday, a documentary team looking for their big break discovers Treha’s abilities and are eager to record her interaction with the elderly. Miriam agrees to their request, much to the chagrin of her superior, and sends Treha on a journey of sorts, that will bring her out of the dark shadows of the past and into the light of the present. What will Treha discover about her past? Will those who were instrumental in harming her be brought to justice? Most importantly, will Treha choose to run to Jesus, The Healer that she needs? To answer these questions, read the book!;) Every Waking Moment would make an excellent Christian drama film, if made by the right people. As the director/writer/producer would already have a plot that needs no alteration, they would instead need to focus on casting the characters appropriately. The starring role of the film would need to be filled by someone who can portray a person afflicted with a disability in a respectful and accurate way, and at the same time bring depth and meaning the the character itself. This person would need to portray to the audience that the main character is not just someone who is disabled, but a person with needs and emotions, just like all of humanity. If done correctly, Every Waking Moment as a film could change how people look at Christian movies for the better.

One thought on “Chris Fabry: Every Waking Moment”