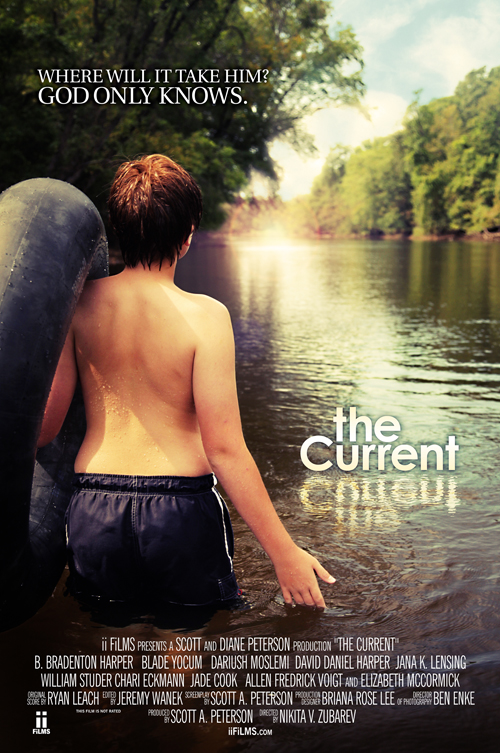 When Jake Larson witnesses a holdup in the city he and his family live in, his parents decide it’s time to move.  They take the chance to move to Minnesota to start a new business venture at a campground retreat.  Jake instantly hates the area and tries to make it miserable for everyone else, but when he befriends a local boy, he sees a whole new world of possibilities that he hadn’t considered before.  He also discovers that his faith in God is more than he thought it was.

For a freshman production, The Current showcases great effort as it checks all of the appearance boxes.  Video quality, camera work, and audio quality are all on the standard they should be on.  The soundtrack leaves something to be desired, however.  But the sets, locations, and props are appropriate and well-funded.  The biggest drawback to point out here is to the poor editing, but this is to be expected from a first-time effort.  Overall, this production is great for a new film maker, which shows potential for the future.

Though this plot is trying to be different and to follow a non-typical plot line, it needs a bit of work.  There are too many awkward attempts at humor and dialogue is only there for the sake of having dialogue, not for the sake of the characters.  This hurts character development, as do the montages and juvenile conversations.  Though there is an interesting idea in here somewhere, there’s not enough content to sustain a feature length film.  Character-driven plots need deep characters, and this is something this story lacks greatly.  Also, the subplots need to be more complex in keeping with the non-traditional setup.  Overall, while there is some potential here, it needs quite a bit of development.

As a slightly amateurish cast, there are some rough performances therein.  Emotions are mostly over the top and there are some forced lines, but this is not to say that the cast doesn’t have their good moments.  There are plenty of reasons to believe in this cast—they just need further development and coaching.

Overall, The Current, though it has a good production, sports the typical marks of a first-time film.  Across the board, plots are usually the number one sticking point that holds Christian films back from being all that it could be.  Though this film does not borrow from conventional and stock plot lines, it still fails to develop the characters in such a way that the audience can relate to them and appreciate them as real people.  However, there is a lot of potential in this creative team and it will be interesting to see what they come up with next.