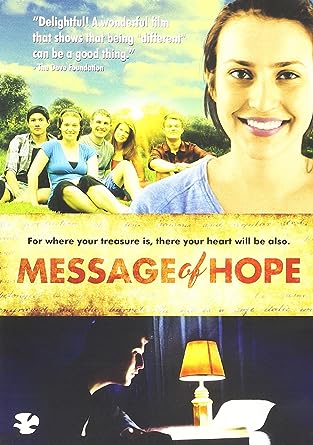 A group of six kids grows up together in the same neighborhood for over ten years and they always have want they want.  However, their parents do not always give them what they really need.  As they encounter various life struggles, each one of them has a different way of dealing with what life throws at them.  Unfortunately, these families do not begin to look at life in a different way until tragedy strikes.  Will they be able to see what really matters in life?

As a relatively amateurish production, Message of Hope has its good points, but it also has quite a few errors.  Video quality and camera work are okay, except for some weird close-ups and some random shaky cam.  Audio quality is also quite random, including loud outside sounds.  However, the soundtrack is fine.  Sets, locations, and props are somewhat limited, yet they have some bright spots.  Furthermore, there is really no editing to speak of in this film as it’s just a conglomerate blob of random content.  When making a new movie, it’s best to know where you are going from the beginning and to communicate that well.

There is basically no way to know what this movie is actually about.  Basically nothing happens for about an hour of runtime as character just wander around and random things happen to them.  It’s hard to keep up with all the characters, especially since they’re so one-dimensional due to empty dialogue.  The Christian characters in particular are overly perfect.  Though there is a lot of message pushing in this film, it’s still aimless and lacks overall purpose until it just comes down to a random end.  Unfortunately, there’s nothing really good to say here, even if they do mean well.

Surprisingly, the acting is actually the strongest area of this film, even if it’s still an average performance.  Some emotions are overdone, but line delivery is mostly okay, even though they didn’t have much to work with.  Some performances in general are overplayed, but overall, this cast shows more potential than the rest of this film.

It’s very hard to understand what this creative team was really going for with this film.  It’s likely that they meant well because there is a good message in here somewhere, but the delivery and presentation is all wrong.  Perhaps it would have been better to go over this film again before it went to production to make sure it came across clearer.  But maybe they will learn from their mistakes and do differently in the future.