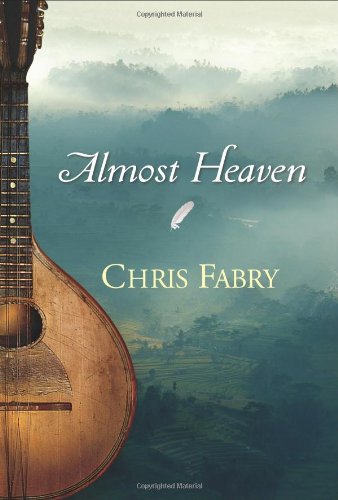 Almost Heaven is one of Chris Fabry’s older novels that is well-loved by avid followers of his work. As with many of his novels, the story told in Almost Heaven set in Fabry’s fictional town of Dogwood, West Virginia. The novel deals with subjects such as the supernatural, angels, God’s divine wisdom, hurting people, coping mechanisms, isolation, forgiveness, and healing. The opening chapters of the novel introduce the reader to the two characters, a man named Billy Allman, and an angel called Malachi. From his youth Billy has loved making music, but the instrument he loves playing the most is the mandolin. Billy was what people would call the outcast during his school years, and because of this, he often turned to his music to forget the hurtful words and actions that he faced each day. Had it not been for the keen ear of a caring teacher, Billy’s musical talent would have remained unnoticed. This recognition naturally leads him down the path of fame and fortune, however, a major and unexpected turn of events will change Billy’s life forever. Malachi is an angel whom God has assigned to observe Billy Allman’s life. He has observed Billy for many years, and likes to think he knows him very well. However, during a life-changing part of Billy’s life, God temporarily relieves Malachi of his position, therefore causing him to miss a key part of his charge’s life. Upon his return Malachi spends nearly the remainder of the novel trying to discover what led Billy to his current state of disrepair. You see, Billy has thrown himself into running a radio station in his hometown that plays gospel music nearly 24/7. He has no concern for his personal health, and his motive for this heavy workload appears to be pain. Will Malachi discover what happened to Billy? Will Billy turn to God for healing from his painful past? To answer these questions, read the book!;) In my opinion, Almost Heaven is a bit slow to develop and does not hold the attention as well as Fabry’s other novels. While the plot is quite creative and well-thought-out, I think that the characters could have been even deeper. It has been my observation that Fabry usually puts his best effort forward in a novel, which is why this novel was slightly disappointing. However, it is still superior to many other Christian fiction books and is worth a read. Almost Heaven could make an interesting Christian standalone film, however, the filmmaker would have to take care to avoid letting scenes drag on for too long, as is the case on several counts in the novel.