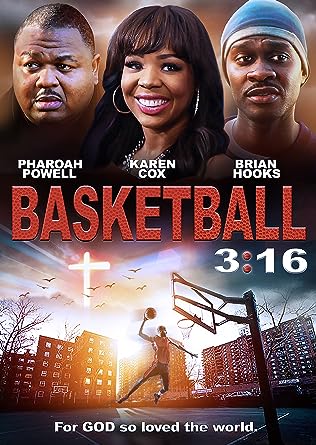 Calvin Nichols never thought he would be able to find God on the basketball court, but God sent someone to share him the Gospel, and his life turned around for the better.  He began trying to get his life in order and became involved in the local church.  When a man comes to the church whom everyone thinks is a hopeless, lost cause, Calvin talks to him and share his story of conversion in the hopes of bringing him to Christ as well.

Unfortunately, like many small church films, Basketball 3:16 suffers from lack of funding.  This is evident in the cheap and limited sets, locations, and props, as well as the marginal audio quality.  Though the video quality and the camera work are fine, there is not enough substantial soundtrack in this film.  Also, in keeping with most movies of this level of funding, the editing is relatively poor and amateurish.  Thus, while films like this can mean all the best in the world, it’s just not enough to overcome the low production quality.

This story seems to mean well and tries to portray real people in real circumstances, but it also projects a deception that everything is automatically fixed when you become a Christian.  Yet it does also try to show the need for making amends, so it’s not totally lost.  The characters are quite realistic, perhaps even too realistic, yet the dialogue is lazy and unengaging.  The Christian characters are too perfect and the non-Christian characters are too ‘bad’.  Overall, since this story is rough around the edges, it needs some refining and deepening in order to be successful.

Too often in this small cast, the cast members are overplaying their characters and trying too hard.  Other times, the line delivery is mumbled and lazy.  There are some good moments, however, but not enough to overcome the negative.  All in all, this statement tends to describe the movie as a whole.

Small church films are a tough sub-genre to review because funding is always going to be a problem.  For this reason, the plot and the characters need to be outstanding to show what the creative team can do with better funding.  There are always meager beginnings in independent Christian films, so it’s what you do with what God has given you that counts.  Most of the time, unfortunately, we feel like the best as not been done with what is provided.