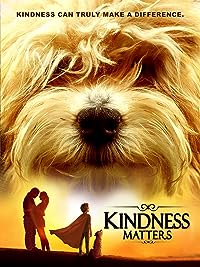 Hudson doesn’t want to do anything except hang around his house and go to work.  His nosy mother is worried about him, which is why she keeps trying to set him up with blind dates.  However, Hudson’s world changes one day when he finds a dog near his trash can and decides to take it in.  Moreover, his world changes again when the dog runs away from their camping trip and finds a new home with a single father and his son, who struggles with a speech impediment.  Perhaps this dog will bring them all together in a really sappy way.

One thing you can say for Faith House Pictures (now re-branded as Inspiriter Pictures for no particular reason, even though they kept that same pixie-dust splash logo) is that they don’t give up.  Also, their production quality has slightly increased over the years, with the exception of Before All Others.  Still, they have figured out a way to mass produce sappy inspirational films that at least seem passable on the surface of production.  This is evidenced by good video quality and camera work.  They still use the same old sets, props, and locations we’ve seen before, such as the desert from Desert Redemption and the houses from So Help Us God and A Time For Heaven.  Also, they make themselves known with a typically cheesy and carefree stock soundtrack that was either cheap or free from some website.  At times, the audio is a bit too quiet, but the editing is basically face-value and fine.  Overall, Faith House is proving that if you stick with something long enough, you might get better at it.

Another defining quality of a Faith House film is a safe and predictable inspirational plot that is extremely sappy and is based on coincidences.  This time around, we get another rendition of the Black Beauty-style pass-the-narrating-animal-around plot.  This worn-out plot device is accompanied by the expected blank and vanilla characters that are written in Faith House scripts.  There is also a strawman ‘bad’ character, and each character has a special brand of quirky yet flat dialogue that makes things just interesting enough to keep watching, if only to see what they might say next.  However, the entire film basically boils down to being a collection of empty scenes that have just enough sappy inspirational themes (coupled with a totally pandering title) to make it a click-bait film that is ready to be added to your Amazon Prime suggested list if you frequent Christian films on this streaming service.  The Christian message is clearly fake,  but it is just enough to get you to watch, which makes this film’s only purpose to pander to a desperate inspirational audience.

Julie Van Lith, Suzanne McGown Brown, and Bill Wetherill are certainly committed to the Faith House cause.  Julie alone has appeared in every Faith House film.  Re-using cast members is another budget-conserving tactic of this company, but retaining good actors and actresses is the ideal.  Still, Faith House and company do just enough to make the acting seem realistic for their audience, even if a majority of the performances are extremely dry, flat, and boring.  Emotional and line delivery seem like they’re phoned in, and there are basically no extras in this film, but it’s not all bad.  Once again, Faith House does the bare minimum to stay relevant.

You can’t fault Faith House’s marketing model: they are running circles around other Christian film makers and their ‘lucrative’ distribution deals that run their ideas into the ground and conceal them in the closed world of Christian film festivals.  After watching every Faith House film to date, we are convinced that they are trolling Christian audiences, but they have proven their point: if you want to get your movie out there, put it directly to Amazon Prime Video.  No exclusive distribution deals, no film festivals, not even review screeners–put it straight to the audience you want to reach and spoon-feed them the message they want to hear.  Doing this is a marketing genius, and our analytics team has confirmed its success as Faith House reviews are among our most viewed posts.  This is not a coincidence, and this is an important message to aspiring film makers: for your first film, you won’t make much money, and it’s likely that Amazon won’t help you turn large profits, but it’s worth it to get your content out there at the beginning so that people know who you are.  Granted you have a good story to tell in the first place, you can grow from there.  Amazon may be Buy-N-Large, but they’re a platform that better Christian film makers can use to gain a voice in an increasingly crowded market.  Marketing matters.