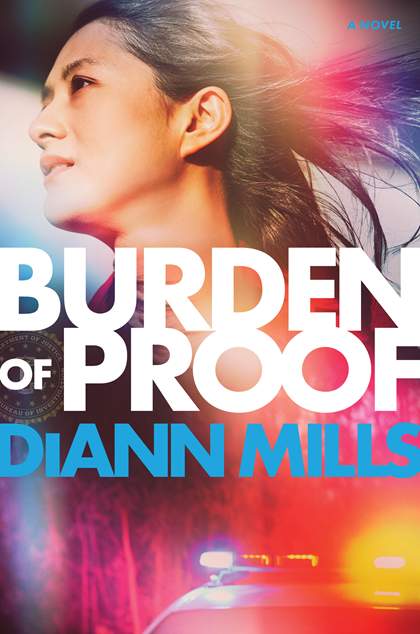 Author’s Note: We were provided with an ARC of this novel in exchange for a fair and honest review.

DiAnn Mills’ new novel is a breath of fresh air in the romantic suspense genre. In Burden of Proof, she takes a step forward from past novels by deepening the complexity of her storyline and adding a couple of unexpected, yet well-crafted plot twists. Mills has always had great potential as a writer, but in this novel she really shines. Burden of Proof tells the story of April Ramos and Jason Snyder, two people who are drawn together by a tragic web of intersecting circumstances in Jason’s hometown. April Ramos, a special agent in the FBI, has always struggled with letting her personal feelings enter a case, and tonight was no different. After failing to talk a former businessman out of committing suicide, April feels guilty and depressed. However, she has no time to dwell on this perceived failure, because she’s about to be thrown into the middle of a small-town feud. When an frazzled woman hands her a crying baby in a coffee shop and doesn’t return, April prepares to call the authorities, only to be escorted out of the building at gunpoint by a man claiming to be the child’s father….Jason Snyder. Jason Snyder has just been accused of murdering his good friend Russell, a deed he did not do, and has been searching for his daughter Isabella, who was recently kidnapped. When he finds her in April’s arms, and learns she is an FBI agent, he sees an opportunity to clear his name. Jason decides to tell April his story, and hope for the best. At first April finds his story incredulous, and is less than cooperative…but as evidence starts turning up, she begins to see the truth in his words. When April and Jason reach his hometown and she begins investigating, she finds that solving the case is nearly impossible as her plans are continually thwarted by the town’s sinister sheriff. Will April solve the case before anything else happens? To answer this question, read the book!;) Small-town corruption is very accurately portrayed in this story. Furthermore, the plot holds the attention from beginning to end, and the outcome is mostly unpredictable. There are some predictable elements, but not enough to mar the plot quality. Finally, I only have two flaws to point out. First, the story is a tiny bit choppy at times, and second, sometimes it seems like April is able to go against FBI procedure without having to face consequences. However, on the whole Mills’ has created an enticing story that is well worth a read.

April and Jason are both well-developed and relatable characters who evolve through their experiences. Yet, first person could have developed their characters even more. In addition, I feel that the eventual romance between them, while downplayed, is unnecessary. On a positive note, I appreciate Mills’ attempt to include more diverse characters, for many Christian romance novels use only white people or portray other races as a stereotype. Mills does neither and her diverse list of characters is refreshing. The only other flaw to point out is that Willis (the sheriff) is pretty much a strawman. Overall, Mills has produced mostly strong characters who drive the plot and make the story all that it is.

Mills earns a half point in originality by portraying all ethnic groups as equal and important, and a half point in creativity for crafting a great storyline that was obviously well researched. She has obviously grown through experience, and the passion that was once a bit misguided is maturing into something admirable. There is no going back from here. This is why I believe this book could make an excellent Christian miniseries. With a good screenwriter (perhaps Ms. Mills!), and a great casting job, this suspense story could reach a lot of people who would not otherwise seek out Christian films/series. To conclude, well done Ms. Mills! Your books have the potential to make a huge difference in the world of Christian filmmaking!