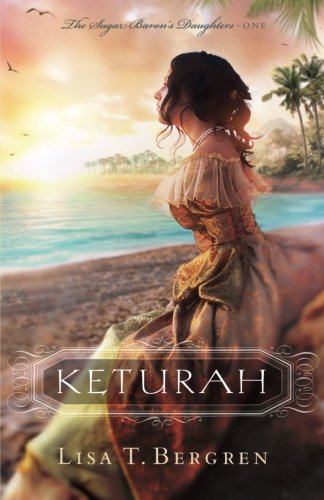 Keturah marks the beginning of Lisa T. Bergren’s new The Sugar Baron’s Daughters series, and while it has promise, it also has room for improvement. Firstly, Bergren is obviously quite capable of crafting a well-researched and historically accurate novel, and she has a noticeable talent for crafting characters with good backstories. However, I felt that at times the plot could have taken some different turns, and wonder if it was necessary for the two main characters to fall in love in this novel. Why not wait until later in the series? This would give them time to establish a real relationship.  The opening chapters of Keturah introduce us to both the Banning sisters, Keturah, Verity, and Selah, and to Gray Covington, a neighbor and friend who happens to be a eligible bachelor…with no money. Keturah was recently widowed…which was both a curse and blessing, for although she is free from her husband’s abuse, his words and actions live on in her mind. On top of this, her father has just died and left her in charge of both family estate and Tabletop, his failing sugar plantation in the West Indies. Keturah has no idea how to run such a business, but is determined to learn. No man will ever take advantage of her again, she decides, it is best to avoid their company as much as possible. Based on this reasoning, Keturah decides to journey to the Indies and stay there for a few years in an attempt to restore Tabletop to it’s former glory. Her sisters, completely ignorant of the inhumane conditions overseas, agree to join her. Gray Covington has assumed the role of managing his father’s plantation in the West Indies, and, reinforced by Keturah’s decision to travel to the same, decides to also make the journey. Gray, who has loved Keturah since childhood, felt helpless as he watched her suffer through an unhappy and abusive marriage, but now that her husband is dead, he feels that he has a second chance to win her heart. However, despite his best attempts, he is coldly denied even friendship…at first. When Keturah and her sisters arrive in the Indies, they are appalled at the brutality inflicted upon their fellow human beings, and Keturah quickly discovers that nothing is as she expected…and that she does, in fact, need help from others. As one tragedy leads to another, will the Banning sisters survive the island? Will Keturah learn to love again? To answer these questions, read the book! On the whole, this plot is engaging and well-crafted. However, some of the interactions between Gray and Keturah are on the brink of suggestive, and the villian character is a bit of a straw-man. For these two reasons, Bergren receives an average score in this section.

On a positive note, Bergren’s strength is her characters. Keturah is very well-developed and relatable. Her experiences are an accurate depiction of the harsh reality that is abusive relationships, and her struggle to trust again and forgive God is realistic. This makes her the best character in the novel. Gray is also a good character, but sometimes his part in the story feels rushed. It is as if he is being held back from reaching his full potential. As previously mentioned, it is my opinion that this could have been remedied by not forcing Keturah and Gray to fall in love all in one book. A gradual romance would have been a great improvement, for even though Gray and Keturah grew up together, their adult selves are quite changed from who they were as children. Finally, the secondary characters are simply average. If Bergren changes a few things, her score in this section could be perfect.

While there are some creative and original aspects in this plot, there are also many predictable moments and overused plot devices found throughout. Therefore, I am giving Bergren a half point in originality for creating a strong heroine and portraying the horrors of slavery accurately. On the whole, this is a good read, and there are many who will enjoy it. I feel that with a few changes, this book could be the start of a great historical Christian miniseries. The screenwriter would need to downplay the romance and bring the secondary characters closer to the story, but it can be done. To conclude, good job Ms. Bergren, I believe that you have the potential to do great things with this new series!