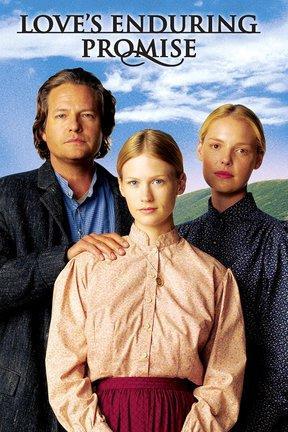 Love’s Enduring Promise has great production quality, with realistic sets, a picturesque location, and great camera work. As our founder pointed out, the main issues here are some choppy editing and the usual unrealistic makeup jobs. Otherwise, this is the strongest area of the film. It is obvious that Michael Landon Jr. is a talented producer. However, as women had little to no access to makeup out West, and only took baths once a week to save water, there is work to do in the area of makeup and costuming. Additionally, after further observation of the book series’ content, I believe this book and the others should be joined together to make a TV series. I believe this is the only way all the content and the many characters could be included. In short, this book should never have been a standalone film.

Where to begin? Michael Landon Jr. has drastically altered the book content in this film, so much so that it barely resembles the original story. First, he pieced together some obscure sub-plots in the final chapters of the novel – Missie went on a date with a man named Grant Thomas and eventually married Willie – and created his usual love triangle between Missie, Grant, and Willie. He purposely ignored the fact that Missie also went on dates with one of Ma Graham’s (Sarah in the movie, oh wait she’s not in this movie, another inaccuracy) sons for some time before going out with Willie, and that it took some time for her and Willie’s relationship to develop. Next, the core incident in the film – Clark cutting his leg with an axe while chopping firewood – never existed in the book. In the novel, there was an obscure sub-plot where Clark had a logging accident and cut his foot. This laid him up for a couple of weeks, but he was never unconscious or in critical condition. In the movie he has an infected limb and potential gangrene, in the book he had a cut that was stitched up, big deal. Finally, in the book Clark and Marty have three children together after becoming a real husband and wife. Arnie was one of their sons, but Landon Jr. forgot Ellie, Luke, and their adopted daughters Nandry and Clae. Nandry and Clae were adopted from a neglectful neighbor who was leaving to pan for gold and was easily convinced to give up his children. While the book content is a bit of an information dump, it would make several great episodes in a TV series. Considering that Landon Jr. has had much success with this in the past, I am flabbergasted as to why he didn’t think of this from the start. People are far more likely to watch TV than go see an obscure inspirational film. This is the main way in which he could have improved the plot and storyline quality.

Again, there is so much bad here it is hard to know where to start. Dale Midkiff is a terrible actor, Katherine Heigl’s promising performance in the previous movie has declined considerably, and the child actors are grating. K’Sun Ray needed serious coaching to come off as anything but a whiny little kid, and it was not given to him. Arnie is barely in the film and has a forgettable performance at best. Logan Bartholomew is awkward and does not accurately portray the Willie character. Finally, January Jones shows potential as Missie, but delivers a mostly blank performance and needs coaching. Landon Jr. could have improved this section by giving Katherine Heigl a chance to improve, and recasting everyone else.

In conclusion, because of all the glaring errors here, this movie deserves a remake. The original book content is worth it. Janette Oke should be a part of the filmmaking, especially the casting. The screenwriter should use the content in the book to create a TV series and make very few alterations. There is enough content to make an entire season out of each book. As seen in When Calls the Heart, screenwriters can build an entire episode around much less! Filmmakers looking to make a historical romance TV series, look no further than this book series for content!