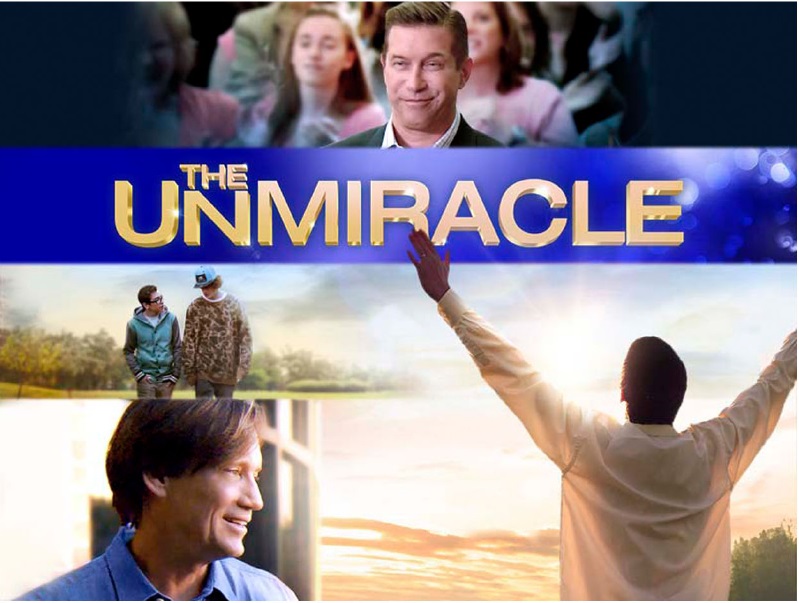 When a group of teens, under the prompting of a college student, becomes involved in illegial drug use, the community is rocked after one of them overdoses herself into a coma.  The police are pressured to find the culprit, but the kids run and hide, except for one brave Christian boy (who was at the drug party that night for some reason) who wants to help his friends (?).  As family is being torn apart by destructive choices, only the power of God can save them from themselves.

The UnMiracle (strange title indeed) is an extremely unique film in many ways.  For starters, the beginning of this film is a different sort of experience, mostly due to some strange and dizzying special effects.  There is also some shaky camera work for drama’s sake.  Also, at first, there is some weird audio quality and odd sound effects, as well as some strange lighting in some scenes.  However, for the most part, these quirks improve throughout to make for a mostly average production.  Video quality is relatively stable throughout, and the soundtrack is at least creative in some ways.  Though the editing can be confusing at times, this production is basically fine and just needs a little tune-up.

From the get go, The UnMiracle has a clear agenda that is pushed through obvious dialogue and messaging.  While there are many pertinent and realistic issues portrayed here, they are not presented very well.  The characters are very flawed, which is great, but they tend to only be one-dimensional in order to represent the issues that are being pushed here.  At first, there are some strange undertones to the film that are mostly driven by the creepy Stephen Baldwin narration.  It seems like sometimes this film is trying to tell us something deeper that it never quite conveys properly.  Yet these cryptic factors are not all bad, as they also include some intriguing psychological elements, as well as a relatively fair portrayal of mental health issues, even though it could use a little deepening.  But this does not make up for the confusing and disorienting sequences throughout, as well as the trite and simplistic approach to problems and the very easy fixing of characters’ struggles by throwing Bible verses at them.  There are also tons of characters and subplots here with very little focus.  Thus, there is too much going on that needs severe organization, yet there it still potential even in all of the confusion.

With Kevin Sorbo and Stephen Baldwin pulling Eric Roberts roles (very brief and small appearances) in this film, the remainder of the cast is hard to figure.  For one, there is a lot of strange and loud makeup throughout.  At first, a lot of the acting is unsure and amateurish and even lethargic and passive at times.  The drug acting is odd and needs work.  However, emotions are mostly realistic, and there is concerted improvement throughout, which is enough to make this an average score.

This film is mostly a hot mess and needs a major remake or rework.  It could potentially be a series if done properly.  But this would mean serious acting coaching (and possible re-casting), way more focus in the storyline, fewer ‘fancy’ production tricks, and some education and research on mental health and substance abuse issues.  In the end, it could be done, and this creative team has some potential, so it will be interesting to see what they come up with next.

Alison is young and pregnant and she has no idea what to do.  Her boyfriend Rick is pressuring her to ‘take care of it’, so she drives herself to the abortion clinic and tries to go through with it, even though she is not sure.  As she continues to go back and forth in her decision, she meets a mysterious janitor who seems to know everything about her.  He tries to convince her not to end her baby’s life, but Alison is still torn.  As the clock ticks down, will she be able to make the right decision before time runs out?

The good thing about Alison’s Choice is that the production quality is nearly flawless.  Video quality, camera work, and audio quality are all very professional.  However, the soundtrack is somewhat typical.  Though the film is limited to basically one set and location, it is utilized well and the props therein are realistic and appropriate.  Really the only production problems to point out pertain to editing, as there are too many wasted scenes and sequences included and too many long scenes.  But despite this fact, it is very clear that great care was taken to make this production excellent.  Unfortunately, the same cannot be said for the rest of this film.

We went into Alison’s Choice with an open mind—we really did.  We still really love the idea behind this film, which keeps this portion from being zero or worse.  Yet this is one of the most horribly wasted ideas on the face of the earth.  Much like David A. R. White and Kirk Cameron, Bruce Marchiano’s movie making style has no respect for subtlety, as everything must be plainly spelled out in black and white without trusting the audience to figure things out on their own.  The Jesus character must be obviously highlighted through dialogue, and other dialogue elements are also extremely forceful.  There is nothing to do in this story except have characters talk (there’s nothing inherently wrong with this if it’s done correctly), but the conversations in this film contain some of the most bizarre insinuations and comments that make for an extremely unusual experience.  There are overt racial stereotypes and borderline racist jokes, not to mention weird comments about biology.  The portrayal of pro-abortion characters is largely strawman and downright embarrassing.  As the conversations meander on and weird things continue happening, Alison’s Choice really just boils down to a cringeworthy portrayal of the pro-life argument combined with a wasted idea.  It’s such a disappointment.

Some of these cast members could be good actors and actresses if they had coaching.  As it is, most of the cast members act like they have been instructed to ad-lib and ramble on in order to fill time.  It’s very hard to believe that some of the sequences of dialogue were actually written as the actors and actresses appear to strain for something to say.  Most of them are either extremely awkward or very over the top, including some laughable racial stereotypes.  In short, there is nothing in this film done subtly or tastefully.

It feels like Alison’s Choice is the Twilight Zone.  There are so many out of place and unnecessary commentaries, besides the ramblings of Bruce Marchiano and other cast members.  This film is essentially another version of The Encounter, just more disappointing.  Marchiano and his team get high marks for production effort, but they completely lost out on the rest of the movie.  This story needed a total rewrite before it was allowed to film, to ensure that this idea was not wasted.  The cast members also needed coaching and refinement.  Though we have been accused of personal attacks in the past and though some lives have been changed as a result of this film, we cannot help but feel that Marchiano’s ego is the thing that keeps Alison’s Choice from being all that it can be.  This is unfortunate, for there was an opportunity for a blockbuster film here.

The Adventures of Mickey Matson and the Copperhead Treasure

Oh, Mickey Matson.  Why does this series exist?  I guess someone pitched the idea of a juvenile young-adult patriotic secret society action adventure suspense secret codes National Treasure concept copycat film to PureFlix and they liked it because they don’t usually have any standards (see Divine Will).  So they found the most redneck characters ever to play the villains and wrote out a bunch of mumbo jumbo about secret codes to make the story look interesting.  Then they thought it would be cool to throw in some kind of cockamamie machine invention doohickey that does alchemy or something.  Basically, this sort-of-non-Christian action adventure film is just too far over our heads to warrant a full review, especially since we can’t make heads or tails of what we’re supposed to learn from it.

Oh, there’s another one?  To think they meant to make more of these like PureFlix’s own version of a poor man’s young adult film franchise.  Seriously, is this all they could come up with?  More redneck villains and stupid props!  More devices, doohickeys, and junk science!  More secret societies and secret codes and secret secrets!  More terrible special effects!  If a non-Christian saw this, they would laugh you out of the room.  This non-franchise should have been left at the storyboard.

Road to the Open

This isn’t really even a Christian film at all, just another random cheap inspirational film that PureFlix endorses.  It was so boring to watch and the only reason we did was so we could see John Schneider and Eric Roberts play an alpha-male star tennis team.  They were barely in the movie as it was, which was a real bummer, and they weren’t even that funny, even though they tried.  Oh well.