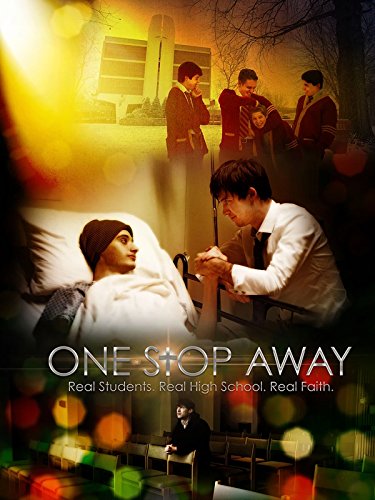 Richard and Eddie became close friends while in college, and they have maintained their close relationship even though life has taken them each in different directions.  Eddie is battling a terminal illness in the hospital while Richard struggles as a young teacher in the school he was raised in.  Richard tries to do what he can to help Eddie and his family, but Eddie’s brother is having struggles of his own in the school where Richard teaches.  They will each have to return to the faith they were raised in to find a way forward.

On the surface, the strangely-titled One Stop Away (there’s never any explanation for that title) has a fairly professional production, as evidenced by good video quality and camera work.  Lighting is mostly good except for a few instances of unnecessary darkness.  The soundtrack is a bit generic, however, and the flashbacks have a purposely odd quality about them.  As for audio, there are too many obvious voice-overs and unnatural sound tricks.  Sets, locations, and props are professional-looking, but the editing poses a substantial problem as it is somewhat disorienting due to a lot of choppy and cut-off scenes.  Overall, this is mainly an average production.

The choppiness bleeds over into the plot, unfortunately, as the storyline is very disorganized.  It depicts random characters doing random things without any clear continuity; it is very difficult to discern which character is which due to the confusing use of flashbacks.  The random time jumps that happen with no warning certainly don’t help things.  Usually, non-linear and out-of-order plots using flashbacks are great ideas, but in this case, One Stop Away is presented very poorly, which seems to indicate that the intended plot is fairly unsubstantial and the premise is too thin.  Elsewhere, dialogue is too empty and expositional, which leads to wooden characters.  Thus, it is very difficult to see the point or purpose of this story as it has one too many boring, lagging, and pointless scenes.  In short, whatever was trying to be conveyed in this film is totally lost on the audience.

As a whole, the acting of this film is mostly okay, but there are one too many awkward moments.  Line delivery is fine, but the emotional is a bit flat, and there are a lot of scenes that come off as overly practiced.  Costuming is better than usual for this sort of film, but this section is unfortunately not more than average.

Basically, while the effort may be commendable in films like One Stop Away, they will unfortunately be easily forgotten and overlooked.  Their messaging is too vague and confusing to each most audiences, even if there was a good idea in here somewhere.  Non-linear, flashback-based plots need deep character development through poignant dialogue and realistic scenes that demonstrate character motive and accessibility.  This is something we have been talking about for a while, but Christian films continue to show a lack of understanding of real people.