Jonathan and Evelyn were engaged when they were young, but mistakes drove them apart. Now that they are both older and widowed, they have come back into each other’s lives because their children have fallen in love. Will they be able to heal the old wounds while looking to the future???

Despite a mostly acceptable production, including fine video quality and camera work, the beginning of this film is quite rough. Audio quality leaves something to be desired, such as an in-your-face soundtrack. Flashbacks have an unnecessarily weird quality to them. Also, sets, locations, and props are slightly limited. Further, editing is incredibly choppy and disorienting. However, there is some improvement as the production goes on, which is enough to warrant an average score for this section.

Throughout this narrative, there is a generally odd tone as the writers try very hard to force their specific doctrines onto the viewers, which include some very unusual beliefs about Christian behaviors. As such, the dialogue is very obvious, creating perfect characters that are inaccessible as they spout Christian platitudes at the other characters. Besides this, some of the characters make really weird decisions for no reasons at all, and in general, events occur simply because the creators wanted them to happen. The “bad” characters are ridiculous stereotypes while the “good” characters push the lie that becoming more religious fixes all one’s problems. Nearly every scene is either about imposing the writers’ worldview or an exploration of edgy content. Basically a long monologue of propaganda, this plot has no potential and is thus awarded no points.

The acting in Promises to Keep is very sub-par. The performances are quite matter-of-fact, including overly practiced and forced emotions. Some scenes have over-the-top drama, such as yelling and screaming. Though line delivery is mostly acceptable, this isn’t enough to keep this section from receiving a low score.

As has been said many times before, when the creator of a screenplay intends to push propaganda in their movie, there’s no way that the film can ever be good. Two main goals of Christian entertainment should be to invite the audience to think and to responsibly present the writers’ worldview without shoving in down viewers’ throats. It’s unbiblical and un-educational to force agendas on audiences, which is why the reputation of Christian media is so poor today. The only way to fix this problem is to focus on quality over quantity as we move forward.

After Marquise tragically loses both of his parents, he is raised by a family friend and tries to find his way through life.  His parents had always taught him the Christian faith and how to live, but he is confused about Christianity since he feels like God took them away from him.  He is tempted to get involved in drugs with a friend since he cannot seem to find stable income elsewhere.  But he is also in love with a pastor’s daughter, and the pastor sees great potential in Marquise and wants to disciple him.  Which path will Marquise ultimately choose?

The Turnaround has a better production than you might expect, but it still commits some rookie errors.  Video quality and camera work are fine.  The audio quality is good except for the awkward soundtrack that sometimes overpowers the scenes.  Sets, locations, and props are average but demonstrate effort.  The biggest problem with this production, besides the useless time subtitles, is the extremely choppy editing that leaves the audience very disoriented and confused.  Scenes jump from one thing to the next with no warning, which hampers the experience.  Overall, this is an average production that has clear areas for improvement.

As previously mentioned, the scenes cut back and forth so quickly and jump all over the place so much that the story is next to impossible to follow.  It is difficult to see how the characters and their situations relate to each other, except for some loose associations.   There is probably an interesting story in here somewhere if it were ordered and organized better.  In the aftermath of the confusion, characters are left under-developed due to empty and wanting dialogue.  There are too many unrelated subplots interspersed with random narration.  It feels like there were too many people writing these ideas and not enough people organizing them in a way that would help the audience appreciate them.  Essentially, this is a nice try but no success.

The acting is actually the strongest element of The Turnaround and keeps it from being in the complete basement of Christian entertainment.  The only real problem to point out with the acting is the fact that there are too many scenes that have people talking over each other.  Otherwise, emotions are mostly believable and line delivery is acceptable.

The Turnaround, though it has some good elements, is one of those films that will easily be forgotten due to otherwise avoidable errors.  We believe that the creators of this film meant well, but in order to make this sort of plot work, the characters have to be realistic and accessible by the audience.  The characters are what make audiences interested in the movie, so without them being properly developed, little interest is generated for the film.  Perhaps the creators will heed this advice in the future. 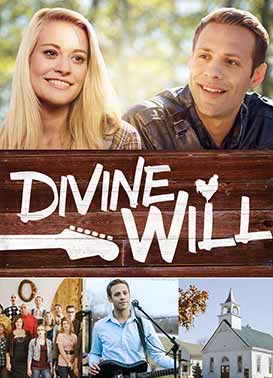 Will Blessing got in too much trouble in the city, so his uncle, the famous rock star Dave Blessing, decides to take a job as a music minister in a church in the small town of Punkyville.  So along with Dave’s eccentric sister Jenny, Will and his uncle pack up and go to the weirdly eccentric, self-parody town of Punkyville and meet all sorts of zany off-the-wall characters that promise to make their life interesting.  Will’s also got this gift of fixing people’s problems or something.  So If you’re looking for a comedic musical sure to entertain, this is the film for you.

The one thing we can say for this diatribe is that they at least attempted an average production quality.  Video quality, audio quality, and camera work are on par.  However, the soundtrack obnoxious as characters randomly burst into song when they feel like it.  The sets and locations are also cheap looking and there are some cheesy special effects.  There is really no editing in this film as it seems like every possible stupid amount of content was included.  Basically, while some money was spent in this production, we have no idea why.

What is this?  Seriously, what is this?  What do the writers take us for?  Is this film geared toward children?  Trust me, we tried to find some clarity, but found none.  Between the impromptu musicals, the zany characters, the bizarre dialogue, and generally random things just happening for no reason, there is no way to follow this madness.  It jumps from one thing to the next and has the feel of a cheap cable television show on a family-friendly channel.  There is no real plot to speak of and nothing to be gained from these empty-headed characters.  A lot of it is seemingly silly for the sake of silliness and sometimes seems to make fun of disabled people.  In short, there is no purpose to this story except for laughs.

Needless to say, this is not the way to cast a film.  While there was really nothing for these actors and actresses to work with, one has to wonder what exactly is going on here.  Do these people like to be portrayed in this way?  Do they watch themselves?  We really can’t say much beyond this, except that you have to watch it to understand what we’re talking about.

So you have some money for a film and you decide to not only rip off a worn out plot concept parodying a small town, but you do so in such an astronomically ridiculous fashion, that it makes Tommy Blaze look smart.  We even considered putting this film in the special category with The Rev; that’s how ridiculous it is.  Sigh.  There is nothing much left to do but finish another review for another stupidly embarrassing Christian movie and wonder what exactly it is that PureFlix turns away.