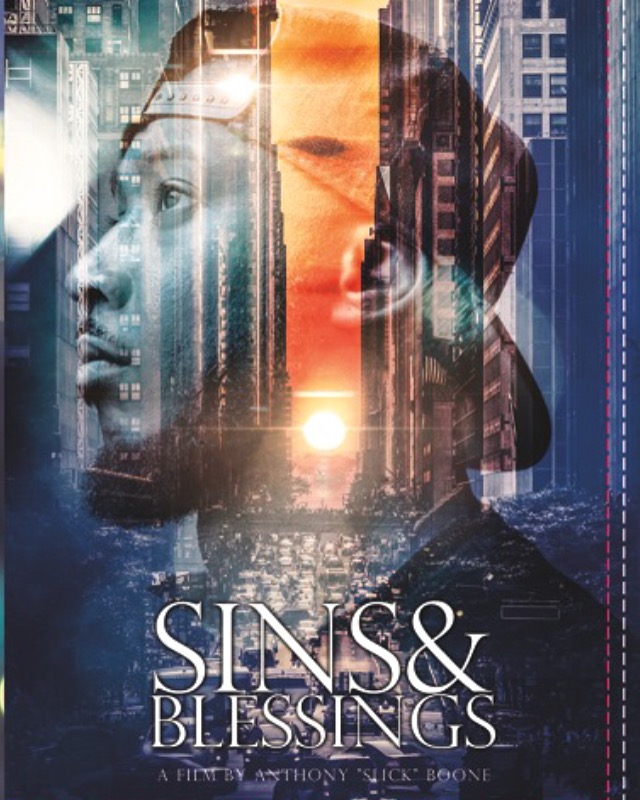 Sean and Cameron are friends, and they have both made mistakes in their past, but each of their lives is taking a different track now.  Cameron is trying to walk the path God wants him to walk, but Sean is stubborn.  However, life circumstances bring Sean to his knees, and God finally gets his attention to tell him that Sean needs to go meet with an old friend in order to save the friend’s life.

Sins and Blessings stands out from movies like it by demonstrating effort to have a quality production.  This include good video quality and camera work.  Audio quality is also good, except for some minor background noises.  The soundtrack is acceptable.  Sets, locations, and props are slightly limited, but they are mostly realistic and adequate for this film.  There are also one too many quick cuts and transitions that hamper the otherwise smooth editing, but these are really the only nitpicks to point out.  In all, this is a respectable production that reflects the (hopefully) growing movement to raise overall quality of Christian films.

The strongest point of this plot pertains to the attempts to craft realistic characters that experience believable struggles and circumstances.  However, there are some missed opportunities to develop deeper characters due to the somewhat shallow quality of the dialogue.  There are a lot of scenes depicting the characters standing around and talking without really saying much substantial that would help us further understand them as people.  The storylines presented in this film are somewhat typical and predictable, but at least they are accessible.  Though the message of this movie is slightly simplistic, it is a good message nonetheless and demonstrates a willingness to be honest about the struggles of people and God’s call.  In short, this is a good start that will hopefully be built off of in the future.

Though this is a mostly amateur cast, their performances are actually better than most church films like this one.  There are good efforts to be realistic through emotions and line delivery.  Most of the time, the cast members are natural in their delivery, even though they can be underwhelming at times.  Yet in the end, this is a very good section to round out an at least average movie.

Sins and Blessings is an ideal start for first time film makers.  It checks all the necessary boxes to be a great jump start for better films in the future.  Once a few of the minor production and acting kinks are worked out and once the plot and characters become slightly more realistic and accessible, this creative team will be well on their way to greatness.  It will be interesting see where they go from here.

After Laurie Curtis survives her harrowing night being stalked by an evil man, she writes a book about her experience and becomes an instantly popular bestseller.  She goes on talk shows and stuff, but little does she know that she is about to be captured again by her nemesis.  Meanwhile, some random youth group is having a camp retreat and they encounter the same evil she does.  Will they be able to run, hide, and pray?

The second installment of this deplorable series is just as bad as the first.  Production is still horrible in every way—video quality is bad and lighting is awful.  Audio quality is still a bust, including a loud, creepy soundtrack and bizarre sound effects throughout.  Camera work looks like a camcorder is mounted on someone’s head while they’re running and walking around.  Sets, locations, and props are as bad as can be expected.  Finally, there is once again no editing.  We are still very unsure what the intent of this series is, but it’s setting records for consistently horrible production quality.

Besides this film’s rehashing and shameless plugging of Pray 1, there is little plot content in this film except for constant forced suspense, talk show sequences, and sequences of random dialogue and activities of daily living.  It’s basically in the same vein of the first installment, just with some different characters and ideas.  The villain character is still a total joke and there are no attempts at all to make the protagonists seem real or even remotely interesting.  There really isn’t even a plot to speak of here, which warrants more negative points.  If you were wondering, the ending of this film is a blatant attempt to get a third installment, which unfortunately worked.

Though this acting job is not as bad as the first, it still doesn’t have anything going for it.  The performances are either flat or over the top in attempts to be interesting.  We get to see more of the villain actor, which isn’t a good thing.  In the end, the Pray Trilogy is going down as one of the most half-cocked, nonsensical experiences in Christian film.

If you fail at something, try a little harder next time.  I guess they did try harder in Pray 2, but they’re still not out of the red.  If something is bad the first time, don’t make three versions of it.  Yet apparently, nobody told this team that what they are making is garbage, because we need more Christian films or something.  Actually, we need more quality Christian films, not trash like this.  Flooding the market with this yard sale fodder isn’t going to cut it.

After a group of friends goes to a Christian rock concert, they return to their hotel and experience some creepy goings-on, thus they decide to abandon their trip early and return home.  However, even when she returns home, one them feels herself being stalked by an unknown entity.  Elsewhere, a new mother of a baby feels herself being watched by someone, but she can’t put her finger on it.  Will any of them be able to trust in God to overcome the evil?

So you want to make a Christian horror movie, huh?  How about you examine the ones already made (like this one) and do everything the opposite way of how they did it.  The production of each of these Pray movies couldn’t be worse.  From dizzying camera zooms to weird camera angles to generally shaky footage, it’s a harrowing experience for all the wrong reasons.  Video quality is mostly poor and lighting is very inconsistent.  The soundtrack is far too loud and the audio is better at picking up the background sounds than the actual dialogue.  Sets and locations are severely limited and there is no editing whatsoever to speak of.  In the end, this production is definitely among the worst.

A ‘Dove-Approved’ ‘Horror’ film can’t actually exist, right?  This means anything ‘horror-like’ has been stripped from it, thus we are left with activities of daily living, local news sequences, television preaching sequences, and most laughable jump scares rivaled only by other films made by these people and the new Left Behind.  There is barely enough dialogue in this film, and what dialogue exists is mostly confusing crosstalk conversations.  With so many sequences of ‘regular life’, there is not enough real suspense.  Any suspense therein is bizarre and manufactured.  Finally, the ending of this film is one of the most laughable and head-scratching experiences ever.  We let asking whether or not it can get any worse than this.

As if the rest of the movie wasn’t bad enough, let’s add an extremely amateur and awkward cast to this mess.  The performances therein are goofy and unsure.  There is far too much yelling and screaming.  It’s so sad that this many people were roped into this nonsense.

The Christian horror genre is among the worst of Christian film, and this should not be.  It’s inexcusable to have so many basement-dwelling films in one genre, especially when this genre offers such a great opportunity to reach outside the walls of the church.  Yet it’s a very difficult genre to pull off, so it would be better to not even attempt it unless you absolutely know what you’re doing.  But wait…there’s two MORE of these films?!?