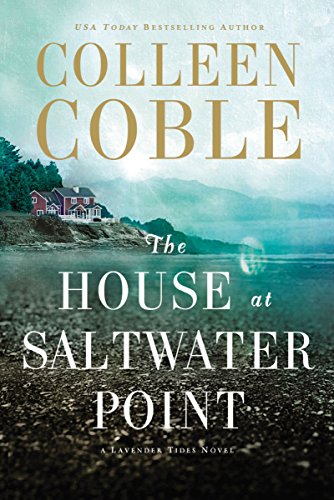 Author’s Note: We were provided with an ARC of this novel in exchange for a fair and honest review.

The House at Saltwater Point is the second book in Coble’s Lavender Tides series. While the first book, The View From Rainshadow Bay, was well-received by most critics, this newer novel has received mixed reviews. In short, opinions about this novel seem to be split right down the middle, some love it, some do not. I tend to fall somewhere in the middle, this novel is neither really good nor really bad. It is simply your average romantic suspense story. Ellie Blackmore and her partner Jason are house flippers based in Lavender Tides, Washington, who enjoy both the work and the fruits of their labors. Ellie and Jason are in the middle of completing a project and purchasing a new house to flip when both their worlds turn upside down. One day while Ellie and Jason are getting ready to leave for a lunch break, Jason and Ellie’s sister Mackenzie (Mac), who happens to be his ex-wife, get into an argument that ends in a conflict between Mac and Ellie. Mac storms out and Ellie is left hurt and confused. Shortly after this conflict Ellie pursues her sister….only to find a large pool of blood on the deck of Mac’s new boat. Mac is nowhere to be found, and Ellie is left to assume the worst. Grayson Bradshaw is a Coast Guard investigator who is looking for notorious terrorist Terek Nasser, the man who killed his best friend. When Grayson discovers a cocaine theft linked to Terek and his men, he pursues it, takes out Terek’s right hand man, and eventually arrives in Lavender Tides to investigate further. His investigation leads him to a connection between Mac’s dissapearance and the cocaine theft. Ellie refuses to believe that her sister was involved in anything illegal, but the facts are looking more and more incriminating. Grayson is also fighting a growing attraction to Ellie, a fact which conflicts with his need to remain emotionally unattached from the case. Is Mac guilty? Can Ellie love a man who suspects her beloved sister? To answer these questions, read the book! The major strength of this plot line is the mostly unpredictable plot twists and turns. However, I observed that there are two major weaknesses. First, the book seems a bit hastily written. And second, the story is a bit rushed and is driven by facts, rather than characters.

Likewise, because the plot is not character-driven, Ellie and Grayson are difficult to relate to through the use of third person. However, there is a lot of potential here. Ellie and Grayson both have great backstories that Coble uses to influence their present state. Furthermore, Grayson is Coble’s strongest character in this novel because she uses key psychological trauma elements to unfold his part of the story. Jason is also a good character, but he seems incomplete. The only other weakness to point out here is the unnecessary explanations for each character’s existence as they appear in the story. Therefore, character development rounds out to be a slightly above average performance.

Lastly, Coble earns a point for creativity because of her well-crafted use of suppressed childhood trauma. This type of creativity is not often seen in the suspense genre, therefore, I commend Coble on her effort in this area. However, she could improve in the area of originality. In comparison, Coble’s strength is crafting a strong storyline with a good ending. Therefore, I think this novel could make an interesting Christian drama/suspense film. I feel that a screenwriter could take the strongest characters; Ellie, Grayson, Mac, and Jason, and create a character driven suspense plot that employs the good psychological elements that Coble has already created. To sum things up, good job Ms. Coble, you have the potential to be a light in the shadows of suspense novels. I am excited to read the next novel in the Lavender Tides series! 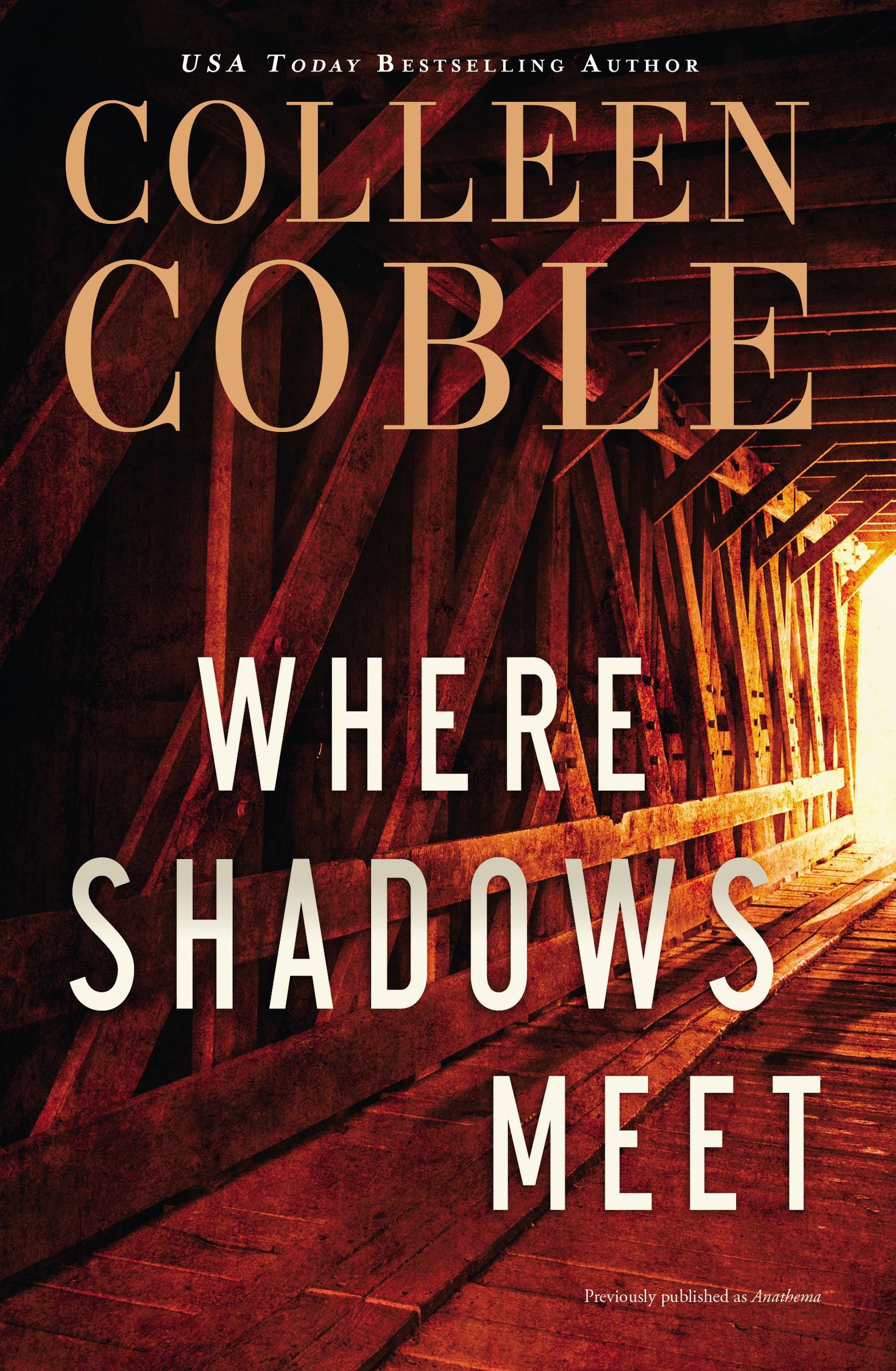 Author’s Note: We were provided with a free copy of this novel in exchange for a fair and honest review.

Colleen Coble brings a dramatic suspense plot to life in this new title. Where Shadows Meet has a mostly engaging plot-line with a well-done plot twist for the conclusion. The struggle of suspense plots is always crafting a believable villain. Coble does an admirable job here by concealing the villain’s identity until nearly the last moment. However, the biggest fault I found with the villain was that while they had reason to be the way that they were, the explanation behind their twisted actions was revealed in an information dump at the end, rather than developing gradually throughout the tale. However, the biggest strength here was most definitely the plot and storyline quality. This is what saved the book from being below average. Hannah Schwartz is your average young Amish woman. She is engaged to an kind young man whose lack of wow factor is remedied by his standing in the community. And anyway, the bishop approves of the match, and what he says is law. Her family loves her, she has good friends…and yet, Hannah envies the ways of the English (average Americans). When her parents are brutally killed by a serial murderer who is known by their infamous red symbol, Hannah flees everything she knows and runs away to marry her secret lover, an enigma named Reece. However, the English life holds nothing but sorrow for Hannah, for the kind and supportive man she married transforms quickly into a controlling madman who hates children and won’t even consider the idea of parenthood. Hannah’s eventual pregnancy sends Reece over the edge, and he pushes her down the stairs in an effort to rid himself of the child within her. Hannah survives the fall and Reece tells her their unborn child has died. Hannah runs again, this time to a new life as an author and quilt-maker. Five years pass, and she finally begins to believe in her freedom…then comes the dreaded phone call. Reece knows where she is and how to contact her. Will she ever escape his grasp and learn the identity of her parent’s killer? Will she receive the child her heart longs for? To answer these questions, read the book!;)

Coble is obviously a talented writer whose specialty is suspense, however, I felt like she was holding back in this plot-line. There are so many books by wannabe famous authors in the suspense genre that Coble must rise above with superior skill. Some may feel my rating harsh, but I simply believe that Coble can give her audience more. Yet, I will say that this book has the potential to revolutionize the Amish theme in Christian film. Therefore, I would like to see it brought to life on the big screen by someone wishing to breathe fresh air into the Amish genre.

It is my opinion that the character development in this novel has room for improvement. Hannah is mostly well-developed, and Reece is not entirely a straw-man abusive husband character, however, it is hard to get to know these characters when the book is written in third person. First person is the way to go in virtually every genre, and this would have improved the novel dramatically. By telling the story in first-person, it would have transformed into a character-driven plot. The readers would have been able to relate to and root for Hannah, and likewise hate and abhor the villain(s). Lastly, the secondary characters are believable, but still, they could have been better. Thus, I think that this is the main area in which Coble could improve.

Finally, I am giving Coble a half point for originality because she did something with the Amish theme that no one has done before. Instead of idolizing their way of living, she pointed out both it’s strengths and weaknesses and used it as the focal point of a suspense plot. This is commendable in many ways, but mostly because the Amish fiction corner is overcrowded and musty with too many similar plot-lines. It is for this reason that Coble has the potential to go far; she clearly has the ability to take an overused plot theme and turn it into something original.