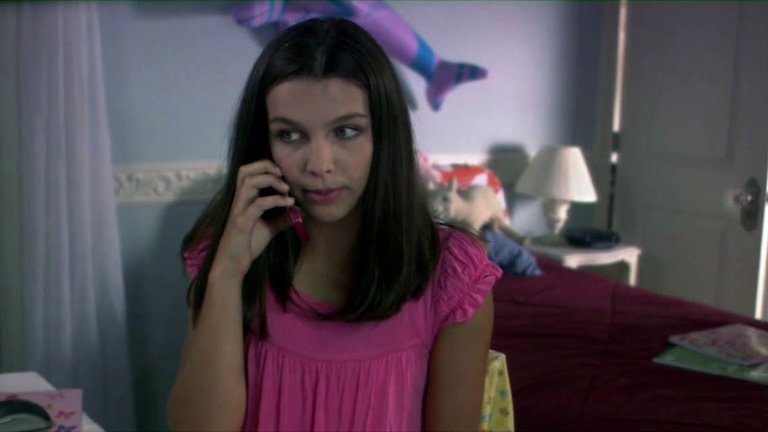 Jesse Tate feels like an outcast teenager at her school since her father is in jail as the scapegoat of his workplace’s crimes.  It seems like everybody hates her, and she is ashamed to admit she is a Christian because of what has gone on.  Though people who used to be called her friends have shunned her, Jesse finds a new purpose in helping the prisoners her father knows, and this helps her grow close to God.  However, a mysterious individual keeps instant messaging her information about her dad’s trial, and Jesse fears that her father’s lawyer does not have his best interests at heart.  Will the truth come out before it’s too late?

Much like Set Apart, Becoming Jesse Tate has a fine production.  This includes good video quality, camera work, and audio quality.  The soundtrack is a bit generic, however, and sets and locations tend to be limited to a few areas.  However, props are well-utilized.  There are a few small editing issues to contend with as well, but on the whole, this is a respectable, standard production that makes the later production of Angels Love Donuts even more perplexing.

Unfortunately, there is very little potential in this plot as the premise is fairly silly and is based on unrealistic circumstances.  The ideas therein are very trite, and the dialogue suffers for lack of substance.  Thus, the characters are flimsy and plastic, not to mention how dumb the ‘villain’ characters are.  Because the characters are one-dimensional, it is difficult to relate to their struggles.  This idea as a whole is very short and limited—it needs a lot more development to be more than the cheesy mystery that it is.  This is not to mention the plot holes and lapses in logic that keep this story moving along to the desired conclusion.  The Christian message is also very sappy and cringeworthy as problems are fixed in ridiculously easy ways.  Basically, the existence of this story is barely justified.

These cast members are fine and seem to care about what they are doing.  However, there are some moments of forceful line delivery and emotions, especially from the ‘villains.’  Some of the teenage actors and actresses are awkward at times and need further refining.  However, there are enough good moments to keep this section average.

It is difficult to measure what is gained from cute little Christian films like this one.  It’s all fine and good, but is a difference really being made?  The creator may mean well, but we need dynamic films that will make a difference, not more movies like this one.  A story like this needs deep characters to carry it along, because without them, as we saw here, it just becomes trite and unimportant, even if it was meant to be serious.

Tyler Doherty is fighting for his life against the cancer inside of him.  But rather than feel sorry for himself, he seeks to reach others for God by writing letters to God and sharing them with other people, especially his new mail carrier, who has a troubled past he is running from.  As Tyler’s family wrestles with what is happening to him, little do they know that God has great things in store for all of them.

As a more ‘mainstream’ Christian film, Letters to God has good production quality, demonstrating that time and money were spent on it.  Video quality is clear and camera work is professional.  The opening sequence is interesting and grabs the attention well.  Audio quality is standard, but the soundtrack is slightly generic.  Sets, locations, and props are realistic and appropriate.  The biggest drawback to this film’s production is the choppy editing that tends to only hit the high points of the storyline.  But overall, this is a respectable effort and one that should be commonplace in Christian film.

As another cancer film based on a true story, Letters to God does better that most in its genre at being realistic.  Though the plot is simplistic, it has a meaningful message that it presented by believable characters that endure realistic struggles.  However, there is some information dump dialogue and there seem to be one too many silly\filler scenes that tend to waste time.  Thus, the plot is somewhat incomplete.  Though the characters can also tend to be heartwarming, we wish we could get to know them a little better through deeper dialogue.  As it is, some of their arcs are too steep and simplified to be appreciated.  However, on the bright side of things, flashbacks are utilized well.  In the end, this plot left a lot on the proverbial playing field that could have made it far better, yet many viewers will enjoy this story and its message.

As a semi-professional cast, these cast members are mostly good when it comes to line delivery and emotions.  There are a few head-scratching moments and awkward displays that detract from the overall score, yet there is not much to complain about here.  This is a demonstration of mostly good casting and coaching.

Letters to God checks the necessary boxes for being marginally successful in the Christian entertainment world: spend time and money to make your production look good and make sure you have a professional cast that makes minimal or not too noticeable errors.  If you can accomplish these two feats in a Christian movie, you are unfortunately far ahead of the game.  Being average is great, based on the low standards that have been set by and myriad of basement-dwelling films on the market.  But we still want movies to take that next step into greatness rather than hover around the middle.  When high quality becomes more widespread in Christian film, then the entire movie industry will never be the same.