The only major production improvement that should be noted in Meant to Be is the need for more organized editing.  In this film, scenes tend to be tossed here and there in a confusing fashion.  However, the editing can only be improved as the plot content is improved.  Thus, a more organized plot would have likely led to improvement in this area.

Meant to Be is one of the most creative and most frustrating films we have ever reviewed.  Without spoiling the major twist at the end, it should be noted that this twist is mostly unexpected, especially after sitting through the boring and purposeless first half of the plot.  This is where most of the audience will be lost, so the most effective thing that could have been done in this situation would have been to make the first half of movie a good film on its own without having to rely on the twist in the second half.  This would also cause misdirection and make the twist even more surprising and out of left field.  As it is, Meant to Be seems to be rushing to get to the twist, and character development is sacrificed in the process.  We need to know what these characters care about and what their motivations are, and this can be done through substantial dialogue.  If these characters would be able to stand on their own apart from the twist, this would have been a truly great film.

Step one: take out Dean Cain.  Further, the jury is still out on whether or not Bradley Dorsey should be acting in his own films.  Other cast members in Meant to Be were underwhelming in their performances, so more improved acting coaching might have helped this section improve.

Bradley Dorsey has some great ideas, but he often stunts their full impact by getting in his own way.  The best thing he can do at this point in his career is to work with a team approach.  He may need to step back from acting in his films and work collaboratively with someone to bring his creative ideas to full fruition by developing deeper characters.  In the end, while it is unclear what his next steps are, if he heeds this advice, he could soar to new heights. 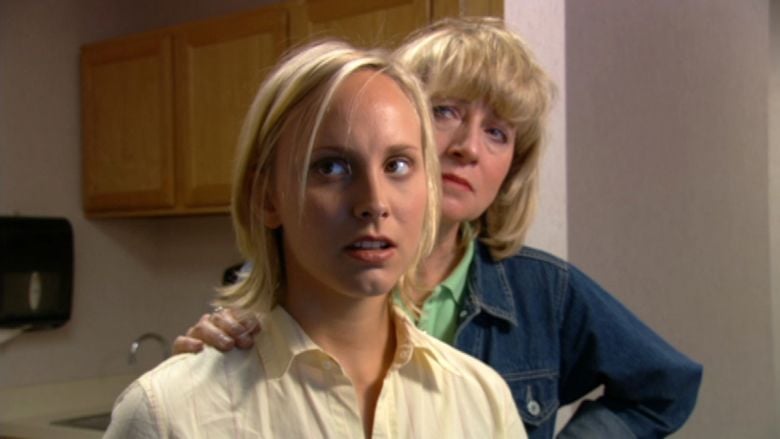 Amy Newhouse had it all—a great family, a boyfriend she loved, and a mission from God.  She knew what God wanted her to do and believed she had a future in the international mission field.  However, God had other plans for her as Amy was diagnosed with cancer.  Through these trials, she had to learn to trust in God’s sovereign plan and to discover the new ministry God was giving her, even when His plans didn’t make sense.

A Greater Yes was made right as the new era of Christian productions was beginning, so it is still a bit raw in parts.  Camera work is okay, as are video and audio quality, although all of these could have used a little ‘sprucing’ up.  The soundtrack is fairly stock, which is disappointing because a story like this needs a meaningful soundtrack to drive the point home.  Sets and locations are fairly limited, thus making for a somewhat cheap feel to the film.  Editing is also poor and leaves a lot to be desired.  There are too many musical montages that take away from useful content.  In the end, while it’s clear that the team of Bradley Dorsey, Marshal Younger, and Clayton Miller meant well, this was just at the beginning of their careers.

We love it when true stories are brought to life in film, but it seems like this plot did not really do the story of Amy Newhouse justice.  There is too much heavy-handed narration and off-screen content that takes the place of character-building and otherwise meaningful content.  The story also jumps all over the place, thus making it hard to follow.  While there are many realistic elements that can be connected back to real life, these characters need to be deeper so that we can connect with them better.  Their dialogue is too shallow as it is and needs fleshing out.  Overall, A Greater Yes has a powerful message that has great potential—it simply needs to be packaged differently.

This cast clearly meant well in their performances and were not putting anything on, as opposed to the practices of other PureFlix casts.  However, these cast members are sometimes too awkward and robotic in their emotions and line delivery.  They would have likely benefitted from improved coaching.

Every film maker has to start somewhere.  For Dorsey, Younger, and Miller, this was the start of a great career.  It’s better to try something rather than try nothing, especially if you are going to learn from your mistakes.  Though A Greater Yes was a meager beginning, it has a meaningful story that many will enjoy.  It is also clear that this trio did learn from their rookie mistakes (especially Younger) and have gone on to do great things.  It just goes to show that if you honestly want to make a difference in film, find the right people to work with, and are willing and ready to improve with each new film, the sky is the limit for you.

While Shawn and Carrie Everett are trying to reconnect as a couple on a camping trip, they are suddenly approached by a mysterious man who talks cryptically to them before pulling out a gun and threatening them to take him where he wants to go.  As Shawn and Carrie agree to help him and as the man continues to babble on about various topics, they begin to get a picture of what this man is all about.  They eventually see him as a desperate man, not a criminal, and concoct a plan to try to intervene in his path of destruction.

How is it possible that certain PureFlix movies have better production than others?  In Taken by Grace, there are few production problems to mention.  The camera work is good, and the video quality is clear.  Audio quality passes the test of authenticity.  The suspenseful musical score is highly effective.  Even though there are few sets, they are used well.  The only major production issue is, of course, editing.  Too many scenes feel cut short and unfinished.  Overall, while this film would have greatly improved with better editing, it’s still a production effort to be proud of.

In this highly dialogue-driven psychological mystery, Bradley Dorsey does not disappoint when it comes to creativity.  Most creators could not handle writing long dialogue scenes for just a handful of characters sitting around in vehicles talking, but the philosophical and psychological elements win out.  While the characters could have been developed better, they are adequate enough.  Unfortunately, there are some typical mystery pitfalls, such as easy coincidences and ‘leads’ that are stumbled upon.  Another major problem is that there is too much wasted time and jumping back and forth.  The minor subplots are underdeveloped and almost seem forced.  Even though the creative concept behind this plot is great, it’s not enough by itself; there needs to be something added to it.  Basically, though it has many great strengths, Taken by Grace is an incomplete idea that needs a remake.

Mental health problems are actually portrayed very well through some of the acting in this film, and are not completely overdone like you would expect from a PureFlix film.  However, sometimes emotions are forced and unbelievable.  We have to question whether or not Bradley Dorsey should star in all of his films, as he seems to always underperform his potential.  But overall, this cast isn’t half bad.

In typical Bradley Dorsey fashion, Taken by Grace walks the line between brilliant creativity and amateurish mistakes.  All the films he’s involved are rooted in a deep and profound concept that challenges Christian movie conventions and genres.  He always employs psychological elements that should be found in many more Christian films.  But little mistakes always hold back his ideas from being all that they could be.  As is the case with Meant to Be, Taken by Grace could have been an awesome Hall of Fame film with just a few things changed and with a deeper storyline.  We hope in the future that Bradley Dorsey and company will take that next step to greatness, because Christian film desperately needs it.

After a negative turn of events in his life, Nathan Burr begins to search for meaning in life.  Recalling his younger years of living with foster parents, he decides he needs to search out his birth mother, who he has never met.  His search takes him to a mysterious hotel where he finds surprising wisdom from the hotel’s aging maid.  But he also finds more questions than answers.  Linda Dickson is a social worker who has guarded a terrible secret all her life.  That’s why she jumps at the chance to help a girl escape from a domestic violence situation.  Little does she know that her world is about to be changed forever.

Starting off, the limited budget of Meant to Be must be accounted for.  The sets are pretty good; the video and sound quality are great.  The camera work tends to be a little too artistic at times, but it seems to work well more than not.  The biggest error here is the confusing editing.  Some scenes seem to cut too quickly and some seem to drag on too long.  This is likely due to the low amount of plot content, but it is overall produced fairly well.

As mentioned, the plot is very limited in scope when it could have been very broad.  There are really only two and half subplots, but it didn’t have to be that way.  Some movies have little room to work, but this one had a mansion.  Though there are few characters, they seem unfinished.  The dialogue is inconsistent.  At first, this plot doesn’t seem sustainable at all.  But more than halfway through the film—if you stick it out—Bradley Dorsey introduces a huge twist that completely changes the audience’s outlook.  This is perhaps the best twist ever in the PureFlix movie.  It makes up for a lot of the movie’s errors, but it also shows just how far the movie could have gone.  Nonetheless, the twist is genius and makes it worth watching.

Unfortunately, the average to poor acting quality also detracts from Meant to Be’s creative premise.  Some of the actors show great potential with better coaching.  Dean Cain seemed like an unnecessary addition to the cast.  Overall, the acting has a lot of potential that was not tapped.

This movie had a mountain of potential—it could have been a nearly perfect film.  It does receive an x-factor point for presenting an important social issue in a very unique and creative way.  We desperately want this movie to be remade, or least the idea to be allowed to be used in a different movie, one with more and better characters, a more complex plot, and better actors.  Bradley Dorsey show great potential as a movie maker, and we anticipate his future films.  He needs a better crew to surround him and to support him in his excellent ideas.  He has a corner on the Christian psychological thriller market if he takes the chance.