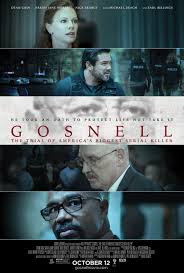 In late 2009 and early 2010, the evil deeds of a rogue abortion doctor, Dr. Kermit Gosnell, were uncovered when his suspect abortion clinic in downtown Philadelphia was raided by multiple agencies due to suspected drug laundering and mysterious deaths of women who went there.  What the authorities found during the raid was shocking and appalling.  A local prosecutor and her detective friend were immediately plunged into a politically-charged trial centered around the controversial social issue of abortion.  As it becomes more evident that Dr. Gosnell exhibited the behaviors of a serial killer, the pushback from powerful lobbyists only increased until the truth was finally exposed for the world to see.

Gosnell had fairly good funding despite their persecution-complex claims.  This translated to a mostly professional-looking production, including good video quality and camera work.  The sets, locations, and props are mostly well-constructed and well-utilized.  There are some randomly dark scenes throughout, but this may be purposeful.  Also, the editing of the film is fairly choppy due to the large amount of plot content that is taken on.  However, overall, this production is above-average even if it could have been a little better than it was.

Gosnell makes many attempts to be overly realistic in its presentation of real events, including unnecessary profanity and edgy content that may be off-putting to a lot of pro-life audiences.  Besides this, there is a lot of expository dialogue throughout that is designed to mask the time jumps and to connect otherwise unconnected scenes together.  Thus, there is lots of content shoved into a small amount of time, even though the writers found plenty of time for shock-and-awe scenes.  There are one too many over-dramatized sidebars detailing the perceived persecution of the pro-life movement, and the ‘bad’ characters are flat-out strawmen.  One bright spot is the interesting use of flashbacks with characters we don’t see enough of, which is a technique that needs to be used more.  If this film’s plot had been more about detailing the real stories of the women who were adversely affected by the negligence and twisted ideas of Dr. Gosnell rather than a politically motivated trial plot reminiscent of God’s Not Dead 2, this would have been an entirely different film.  Thus, while there is some good messaging in this film that keeps it from having no potential, the real stories of real people need to be depicted in film rather than political grandstanding.  Stories and personal experiences are what changes the culture and changes people’s minds on social issues.

Some cast members are hamstrung from the get-go of this film by the poorly written dialogue that is a direct consequence of the time jumps, but Dean Cain posts another weirdly awkward performance regardless.  Cain’s fake attempts at a Philadelphia accent are annoying, and his typical forced line delivery and emotions are wearing.  However, the rest of this cast appears to know what they’re doing, and despite their shortage of things to work with, they are mostly professional and comfortable in their roles.  Overall, this film is basically average.

The pro-life cause does have history and science on its side, but pro-lifers must be very careful to avoid becoming caught up in the political games that are played by the pro-abortion lobby.  There’s no denying that the abortion business is gruesome and downright evil, but the pro-life cause is better than stooping to their level.  Gosnell presents a very important and real-life issue, but one has to wonder how many people will be converted to the cause due to the gruesome nature of this story.  Though it’s extremely difficult to maintain professionalism and balance in a heavily biased and lightning-rod political culture, it’s important that pro-lifers don’t adapt the pro-abortion mentality of victim status and shock-and-awe theatrics just to try to gain political power.  The pro-life movement should not be politically charged, but we are unfortunately far from that reality.  Politics is only a reaction to culture, but changing the culture is much harder to do.  However, it can be done with real stories, and there were real stories to present in this sordid tale, even if we didn’t get to see them very well in this film.  Real women are hurt everyday by the abortion business, and many of them suffer in silence or are compelled to join the pro-abortion political lobby because they feel like the pro-life movement won’t accept them.  We are seeing some change in this area, however, so hopefully we will see more movement in the right direction in the coming days.

Demoted from his detective position because he took a conspiracy theory too far, Rick Dancer feels like an outcast in most people’s eyes.  But then he stumbles onto something new about his theory regarding the city’s richest philanthropist, whom he believes is corrupt.  Yet this only serves him orders for a psychological evaluation, which leads to him taking on a new partner—a traumatized police dog.  Rick will have to learn to work with her while trying to regain the trust of his boss all while he still chases leads regarding his theory.  In the end, he will have to decide if he is going to let himself care again in order to succeed.

In a break from the typical PureFlix model, most production element of Dancer and the Dame are okay.  Video quality is clear and camera work is pretty good; they’re getting better with action shots.  Audio quality is fine, but the soundtrack is annoying.  Prop usage is as cheesy as can be expected from a PureFlix action film attempt.  The sets and locations are fairly realistic but are also stereotypical.  As for the editing, there’s basically none of it.  The entire film is face value: what they filmed is what you get.  Every scene is run as long as it possibly can be and there’s really nothing else there.  But the rundown is that Dancer is pretty average on production, which is actually a step up from the norm.  This fact alone is disturbing.

So essentially, this story is about a washed up cop doing office work at the precinct because his conspiracy theory about a local rich guy blew up in his face.  But he gets a second chance in his career when his theories start to be ‘proven’ true.  Then he’s sentenced to a suspect mental evaluation which consists of the psychologist pushing her opinions on him and then forcing him to take her dog off of his hands.  From there, doggish ‘comedy’ ensues as Dancer stumbles upon ‘clues’ like a children’s mystery (or maybe a Hallmark mystery).  The characters are flat and comedy is typical Tommy Blaze style.  Once again, another horrible portrayal of counseling\psychology in a Christian film.  The odd thing about this Blaze creation is that it’s not entirely committed to crass and cartoonish ‘jokes’, but instead tries to insert inspirational themes into the movie, such as the typical feel-good pet storyline.  This is not to mention the Christian-sounding messages awkwardly forced into key parts of the plot.  And what’s with the constant cheesy references to dog breeds ‘hidden’ in people’s names?  In short, this film is a usual Blaze train wreck—a little less zany than usual, but still a mess.

The sad state of Christian casting is that ‘secular’ actor Billy Gardell is substantially better at acting than most PureFlix actors and actresses.  David A. R. White, Tommy Blaze, Brad Heller, Carey Scott, and Anna Zielinski are all their typical selves.  There is really no regard for any professionalism, yet line delivery is not terrible, just awkward.  Basically, nice try, but not good enough.

Year after year PureFlix rolls out laughable films in the name of Christianity.  They are rarely received well and seem to accomplish little for the Kingdom.  We’ll never understand where they constantly get their money from or how they convince more popular actors and actresses to appear in their films.  If you’ve seen one dumb PureFlix movie, you’ve definitely seen Dancer and the Dame.  It’s better to not waste your time on another one.