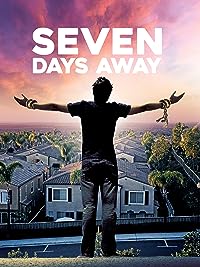 After Clayton’s father dies on the mission field, Clayton commits himself to serving God through missions just like his father did.  Thus, when Clayton is given the chance to go to Mexico with some friends, he takes it.  However, he finds that all is not as it seems as his friends are only there to party and mess around.  Clayton finds himself alone and suddenly kidnapped by local criminals.  Will he be able to trust God to him out alive?

Seven Days Away is a return to basement production quality, as video quality is the only good element to mention here.  Camera work is too wild in attempts to be dramatic and action-packed.  Audio quality is off and the soundtrack is constantly interrupting things.  The sets, locations, and props are the worst possible.  Finally, the editing is awful as scenes sometimes cut off in the middle of things.  The film jumps all over the place and is overall disorienting.  In the end, this is a very unimpressive effort.

This story is another forced drama fest that gives Josiah David Warren a venue to do whatever he wants.  There is no focus, direction, or purpose in this plot as it unfolds in a very confusing and isolating manner.  It contains a lot of nonsensical elements, such as forcing people to go to church, and all the usual childish dialogue and characters.  Unfortunately, there is basically no potential in this vague and limited idea and only serves to be another Christian film embarrassment.

This cast is the same old story as most other Strong Foundation Films.  Josiah David Warren is still in the forefront and is still unsure of himself.  There are too many extreme emotions throughout this cast in attempts to be suspenseful or something.  There is also a lot of yelling and off-kilter line delivery.  To say the least, this rounds out another basement-dwelling Christian movie.

Seven Days Away had a lower budget than usual for Strong Foundation, and it shows.  It’s rarely a good idea to make two movies in one year, yet Strong Foundation makes a habit of this.  All of Josiah David Warren’s forced melodrama is just too much for any film, especially since it dominates all of the movies put out by this outfit.  We hope they mean well, but their delivery is just all wrong.