R. Scott Cooper is a struggling documentary film maker, but he gets a big break when an investor pays him to move his family to Georgia and go undercover as a local church member. While in disguise, Scott is supposed to record everything he sees using a special pair of glasses. However, halfway through the assignment, Scott and his wife begin to change their minds about the scheme as things in the small group aren’t what they thought. Will they have the courage to do what’s right before it’s too late?

As a 2020 production, Small Group‘s is nearly flawless. Video quality, audio quality, and camera work are all on point. The sets, locations, and props are well-funded and well-utilized. There are no lighting problems, and the soundtrack is acceptable. The only thing keeping this section from being perfect is the poor editing, but this is likely a byproduct of a bloated plot. Hence, this section receives a high score.

Despite a somewhat forced premise, this narrative has a surprising amount of potential, starting with the mostly realistic portrayals of people in churches. Some comedic scenes are actually funny due to pretty good dialogue, and the writers raise a lot of legitimate points about institutionalized churches. Nonetheless, the storylines struggles with being more than just a collection of funny sequences that are strung together without specific focus. The ‘villain’ is a total strawman, and certain things happen because the plot requires them to, causing the characters to be swept away in the circumstances and hitting on all the expected points. Although there are too many characters and subplots to adequately focus on in one film, some scenes occur for no reason at all except to fill time. Trying to do everything at once causes the narrative to leave behind a lot of unfinished ideas; it feels more like a series than a movie as some elements come completely out of left field and don’t fit with the overall purpose (if there is one). The sheer amount of content in this story is overwhelming for the audience, and some humor is just ridiculously obnoxious. However, though the ending sequence is rushed and tends to magically fix its problems via unrealistic coincidences, the conclusion is better than the beginning if you make it there. Therefore, this sliver of potential, in addition to pretty good characters, keeps this section from being zero.

Much like its production, Small Group‘s acting is actually quite good. Though some cast members tend to have overdone lines and emotions, all performances get better as they go. As a whole, this section exhibits a lot of professionalism and rounds out a big mixed bag.

This screenplay’s central problem is that it can’t decide if it’s about hidden problems within the American church, quirks of American churchgoers, ministries and corruption in Central America, and people doing silly stuff together. Surprisingly, despite the jumbled plot, there’s actually hope for Small Group…in series form. There’s simply too much going on here to make a less-than-two-hour film. Had a series been made instead of a movie, this idea would have had more room to authentically develop. As it is, based on its heavy marketing push, Small Group unfortunately feels like another Christian entertainment cash grab. 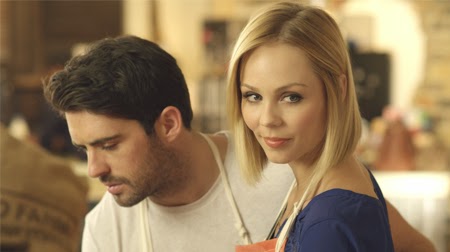 Donovan has always loved her dream job as the owner of a local coffee shop, but she fears that her mortgage is about to cause her dream to end prematurely.  What’s worse is a hotshot playwright comes to town and starts off completely on the wrong foot with her, all the while Donovan’s sister is trying to get her to run back to the boyfriend who left Donovan for a big time Chicago job.  Will Donovan be able to sort out all the confusion in time to save her dreams?

Up Entertainment has perfected the Hallmark model of putting out a consistent amount of films with fairly professional production quality in each one.  Video quality, camera work, and audio quality are all what they should be.  The soundtrack is a bit too generic, however, which fits this genre to a T.  What also typically comes with this sort of made for television movie is relatively good sets, locations, and props, yet some minor editing issues that plague it, all in the name of making the runtime trim.  All of these typical elements are present in Coffee Shop, making it seem like it was made on an assembly line.  Overall, though the production is great, there are plenty of other predictable elements to point.

Though this story is trying a bit harder than most made for TV romantic comedies, Coffee Shop is still an extremely typical story about a jilted girlfriend who has to save her ______ and then both her old boyfriend and a new well-groomed man whom she doesn’t like at first but grows to like show up in the small town she lives in with other quirky characters.  Though some of the characters demonstrate attempts to be creative, probably mostly the influence of the Erwin brothers, there are just too many predictable elements for this section to warrant any more points.  The entire plot follows a predictable progression and the end can be seen from the beginning.  In the end, it’s hard to see the justification for yet another one of these sorts of films.

Despite all of other issues, the Erwin brothers still do their thing and win out when it comes to casting and acting coaching.  There are virtually no errors in this section as line delivery is on point and emotions are very natural.  UP and Hallmark should consider hiring the Erwins as permanent casting help.

We realize the machine of cable television demands certain movies that fit into certain molds, so perhaps there is really no solution to this problem until cable is no longer relied upon as a source of entertainment revenue.  Creative Christian film makers need a better outlet for their films so that they can showcase their talent outside of the confines of a revenue-seeking machine.  Perhaps one day we will see more of these sorts of films on streaming services such as PureFlix.