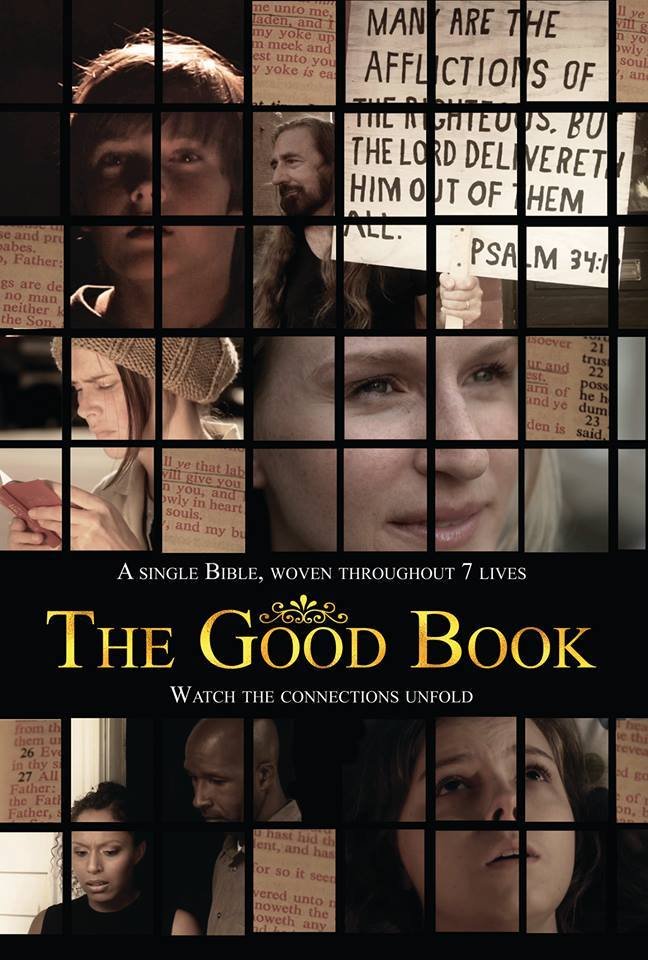 The Bible is a powerful book that has been changing lives for centuries.  A group of people in a small town individually face struggles and circumstances that lead them searching for fresh help, the Word of God comes to them and helps them understand exactly what they need to do.  Each situation is difference and each struggle is unique, but the same Book shows each one the way to go.  This Good Book can do the same for your life.

As an ambitious silent film, The Good Book boasts many professional elements.  The fundamentals—camera work, video quality, and audio quality—are all excellent.  In a silent film, the soundtrack is key, and this one delivers.  An original instrumental soundtrack is very effective with this type of movie.  Sets and locations are also realistic and down to earth.  The only real problem to point out here is the editing, as it is hard to follow where the movie is going.  But overall, this is a high quality production that shows great potential for the future.

It’s not easy to integrate unrelated multiple storylines in a way that is engaging and makes sense.  However, The Good Book does this fairly well, even though we would have liked to see a little more plot continuity.  There is always going to be a ceiling for silent plots, as dialogue is absent and can only be implied.  Yet this story is understandable and powerful all the same.  The situations experienced by the characters are realistic and relatable.  The ending of the story is powerful and could almost be a movie in and of itself.  In the end, this is a great effort and shows true talent.  When Sharon Wilharm and her team make a non-silent story, they will be a force to be reckoned with.

Silent acting is sometimes better for some cast members (coughcoughJennGotzoncoughcough).  With silent acting, coaching is always needed and thus, the cast members have to work to show emotion, and this usually pays off.   Though silent, what this cast is trying to convey is mostly understandable.  The main caveat here is that it seems like some cast members are trying too hard to express themselves.  But otherwise, this is a good effort.

The Mainstreet Productions team was wise to begin with silent films like this one and Providence.  The Good Book has a powerful and undeniable message and is certainly worth a watch.  We believe Wilharm and company are talented and have a lot of offer to Christian film, so it will be exciting to see what they do next.

As the Nazis strengthened their grip on the Netherlands, the brave Ten Boom family and their accomplices—a secret army of teenagers and college students—worked tirelessly to undermine the evil work of the Third Reich.  From hiding Jews and sympathizers to tracking Nazi movements to distributing illegal material to springing prisoners, the ragtag force was constantly doing something to resist the evil.  But when they are stretched to their furthest point and feel like all hope is lost, they will have to dig deep and determine what really matters most.

From start to finish, it is evident that the Spencer family and their team are dedicated to high quality productions.  It was ambitious of them to choose a difficult historical setting to portray, but they delivered exquisitely.  Each set, location, and prop is perfectly crafted for realism.  Video quality is excellent and camera work is effective in building suspense.  Audio quality has no flaws and the soundtrack is epic.  The only nitpick to raise here is some minor editing problems, probably due to the nature of this large-scale story.  But in the end, this is a top-notch production that will take them places in the future.

We always say that when it comes to movies, true stories are usually better than fiction.  Return the Hiding Place is an example of this.  Though the historical topic is very large and difficult to handle, it is handled almost perfectly.  Though there are many subplots, a common thread weaves them together to forge a true historical epic.  The characters are many, but they are believable and authentic.  Real, even hard, life is portrayed effectively.  The ending is powerful and drives the point home.  The biggest issue to raise here is the constant and seemingly unnecessary narration throughout.  While the dialogue therein is great, we would have liked to see more showing than telling.  But otherwise, this is a plot to behold and one you don’t want to miss out on.

Much thought was put into making this cast historically and culturally authentic, from costuming to accents.  Each character is cast excellently.  Line delivery is very much on point and emotions are real and believable.  The only compliant to raise here is some minor accent issues, but it’s not enough to detract too much.  In short, like every aspect of this film, it’s a job well done.

Return to the Hiding Place receives half of an x-factor point for portraying an important issue by properly connecting with audiences in multiple ways.  This is the sort of film we should see over and over again produced from Christian entertainment.  It’s high quality, plot-heavy, and well-cast.  Money was clearly spent wisely to make this film the best it could be, and it paid off.  The Spencer family and their team are truly talented, so we can’t wait to see what they have planned next.

Recent immigrants from Germany to colonial America in order to find religious freedom, Barbara Leninger, her parents, and her siblings did not expect to come face to face with the violence between the Native Americans and the settlers.  In a shocking raid, Barbara and her sister Regina are separated from their mother after witnessing the deaths of their brother and father.  Barbara and Regina are forced to become Native American girls in every way, including attire and behavior.  They band together with other captive children, keeping each other morally afloat by singing the Leninger family hymn, Alone Yet Not Alone.  But when Barbara and Regina are separated, their true faith in God is tested to the limits as they risk their lives by attempting to escape in order to find each other again.

For a first time filmmaker, Alone Yet Not Alone has above average production quality.  The camera work is good, as multiple complex action scenes are filmed relatively well.  The editing is okay, considering the large amount of content and the passage of time in this movie.  One drawback is that some of the makeup work and costuming show indie qualities, but this does not cause irreparable harm.  In short, this is a good start for production.

This movie is based off of true events, so realism in the plot cannot be argued with.  There are realistic twists, turns, and disappointments throughout.  As previously mentioned, a lot of time is covered, and this is pulled off fairly well.  However, the characters are not developed as well as they should be as the dialogue is just average. Additionally, some cast members do not appear to be culturally authentic. Regardless, inaugural film projects should tend to be based on real events, and this criteria is met.

For a cast of allegedly inexperienced actors, there are not too many glaring errors.  Some movie-makers commit grave errors with casts of allegedly professional actors.  Sometimes it is difficult to cast multiple actors for the same character in a plot that requires age differences, but Alone Yet Not Alone does not make this a problem.  Some negative elements should be examined however, such as the poor acting of some of the supporting actors and the fact that not all of the Native American characters were played by true Native Americans.  Box Office Revolution realizes that it is difficult to acquire so many Native Americans for a movie, so this may be a moot point.  In summary, more is made out of this little-know cast than is made out of casts that are supposedly star-studded.

Alone Yet Not Alone is a good start for the team behind it; it is definitely something to build off of.  It contains a believable plot that can relate to most audiences, highlighting a little known historical period well.  In short, if more Christian movies were of this caliber instead of so many unwatchable movies in the Christian genre, the movement as a whole would have a greater reputation than it currently does.