Robbie Steele is an overconfident attorney who believes that she can singlehandedly save the city of Vancouver by keeping their struggling hockey team from skipping town. To do this, Robbie just needs to convince Cody Harris, an estranged but previously popular hockey player, to sign with her home team. However, talking Cody into doing this proves to be a more difficult feat that Robbie expected, especially since Cody has recently become a Christian.

As a 1990s production, Power Play has plenty of holes in it. Despite acceptable camera and audio work, video quality is burry, and the soundtrack is loud and antiquated. There are also cheesy sound effects and wild camera work in the action scenes. Sets, locations, and props are okay, but there are many disorienting flashes and transitions throughout the film, making for an annoying experience. Further, editing is incredibly choppy, sometimes prematurely cutting off scenes. In general, the production gets worse as it goes, which leaves only a tiny score for this section.

Although this narrative has an interesting premise, it’s hard to get to know the characters due to the breakneck pace of the plot. Additionally, the premise is very trumped-up as writers go out of their way to make certain events happen that they want to occur. The Christian characters are too perfect, and while the flawed characters have potential, they are swept along by the rapid story progression, which short-circuits potential development. It’s a shame that some of these characters were wasted in this way, but there’s unfortunately no way to justify awarding points for this aspect of the screenplay.

Though the acting in Power Play is fairly unsure, this section is actually the strongest of the whole movie. Despite instances of cast members of trying too hard and scenes that feel like one-takes, the performances are not all bad. Some line delivery and emotions are acceptable, which is enough to warrant an average score.

Traditionally, the Worldwide Pictures team was committed to quality in their films. However, Power Play is an exception. Without a quality production and engaging storyline, there is little for a viewer to be interested in. However, the Christian entertainment industry is hopefully moving past this older era of screenplays.

Constance Gibson decides to take her three children to the growing city of Los Angeles in search of her absent husband in the hopes that he has been able to start a new life for them all.  However, as they arrive in the strange new city, they find that not all is as they expected, and they will have to make some hard decisions in order to face the future.  Through it all, will they be able to press into their faith in God to get through the dark times?

For a production created in 1993, Come the Morning is excellent.  Worldwide Pictures has always been a standout company for their commitment to production quality.  Video quality, audio quality, soundtrack, and camera work are all what they should be in this film.  There was obviously great care given to the historical authenticity of this film’s sets, locations, and props.  The only small issues to point out here pertain to some slightly low-quality lighting in some scenes, as well as some quick cuts and transitions in the editing.  However, in the end, this is an excellent effort and is one that can serve as an example for future films.

Unlike other Christian films newer than it, Come the Morning exhibits Worldwide Pictures’ ability to capture the real-life struggles of accessible characters.  This story is not afraid to portray gritty circumstances and contains a lot of good ideas.  The characters are very believable, yet they could use a little more personality through more complex dialogue.  They have a tendency to be swept along by circumstances.  It also seems like this story could be longer than it is, since it leaves a lot of potential on the proverbial playing field.  But regardless of this, Come the Morning is an accessible story that depicts a realistic story that many audiences will enjoy.

The acting is the strongest section of this film since there are no real errors to point out here.  This is a very encouraging acting job to witness, as emotions are all believable and line delivery is very much on point.  The costuming is also authentic, which show great effort.  This rounds out a very respectable creation.

We desperately need more Christian film making groups and creative teams who are consistently committed to rolling out movies that are quality on all fronts.  Five- and six-point ratings should be the norm in Christian film, as Worldwide Pictures always did.  If this were the case in Christian entertainment, we would be looking at a completely new field filled with greater opportunities and successes. 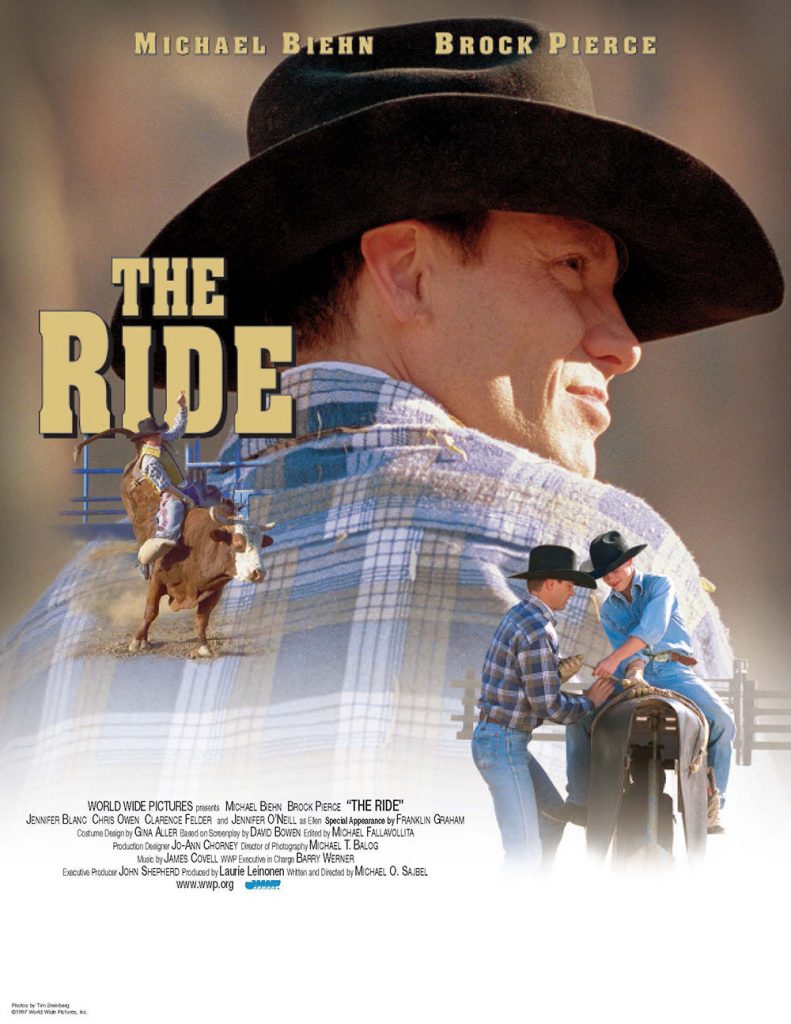 Smokey Banks was one of the best bull riders in the field before he became consumed with alcohol and gambling.  After he finally hits rock bottom by getting himself in trouble, he will have to decide whether or not he wants to go to jail or if he wants to work at a troubled boys ranch teaching the residents how to be cowboys.  One of the boys, much to Smokey’s chagrin, becomes very attached to the fallen athlete and convinces Smokey to teach him how to ride a bull.  Little does Smokey know that his life will be forever changed as a result of coming to the ranch.

For a late 1990s production, in keeping with usual Worldwide Pictures quality, The Ride is at least average, which was good for the time period.  The opening sequence is effective and seems like the most effort was put into it.  Camera work is good for the genre, though video quality is slightly grainy.  Audio quality is fine, but the soundtrack is generic.  Sets, locations, and props clearly had a lot of time put into them to make the film look realistic.  Yet the editing of The Ride is an issue as the film jumps around too much and confuses the audience.  Overall, this movie is passable and will be enjoyable to some audiences.

This plot is a slightly typical fish-out-of-water plot featuring a spoiled and famous ‘city’ character being forced to live in the ‘wilderness’, yet it is fairly well done.  The characters therein are quite stereotypical, however, and fit into predetermined molds.  There is also not enough plot content as time is used on too many filler scenes.  Nevertheless, most of the dialogue is good and there are attempts to be meaningful.  But in the end, the plot progression is quite predictable, including many expected scenes and a silly romantic subplot.  In short, this is a fine effort, but it comes off a little bit lazy and phoned in.

For a supposedly professional cast, these performances are not what they should be.  There is far too much yelling and emotions are too extreme.  Line delivery is forceful and robotic throughout.  However, performances do improve in the second half of the film, although it is a little late.

Worldwide Pictures had stronger films than The Ride.  This one was perhaps before their prime and before they had fully honed the skills of quality film making.  The good thing is that they did not stay at this lower quality for very long.  But it’s a shame that they stopped making films after Last Flight Out, because, as pioneers in the field, they could have continued to adapt and change and still be a force to be reckoned with.  Perhaps they will once again take up film making as a mode of evangelism one day.