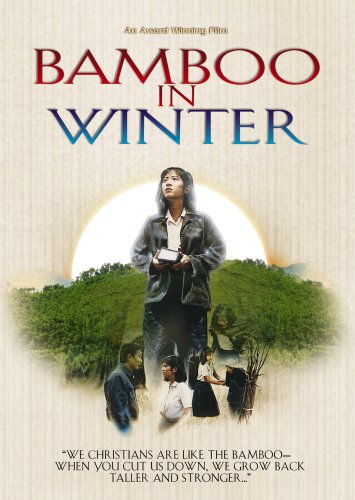 When Su Ming decides to find out for herself what the Christians who live near her Chinese village believe, she discovers a new opportunity in life to have faith that she never thought was possible.  She is drawn to the teachings of Christ and asks the local preacher every question she can think of.  However, though she finally surrenders to Christ, she does not expect the governmental persecution that follows.  As she sees other Christians giving their lives for the sake of Jesus, Su Ming will have to decide whether or not she will one day do the same.

Though Bamboo in Winter is an archaic 1990s production, it is actually not half bad, considering the time period and the limited resources.  Video quality is a bit blurry at times and audio quality is sometimes poor.  Camera work, however, is fine, yet the soundtrack is outdated.  However, considering the time period, the sets, locations, and props are very realistic and culturally accurate.  It’s clear that attention was given to this area, and there are other production improvements throughout.  Finally, the editing is okay, which rounds out an overall average production, yet it is certainly nothing to be ashamed of.

Though the first half of this story is dominated by a lot of narration, it is still a unique, realistic, and believable storyline, even if it is a very short idea.  Better care is given to developing the characters in this plot than in most movies newer than it.  This is done through effective dialogue and authentic circumstances.  The audience can appreciate what the characters are experiencing for this reason.  The ending is also thought-provoking and non-typical.  Overall, though it is short in duration, this story has a great message that probably deserves to be reused in the future.

It’s surprising that a Christian film of this age had the resources to assemble such a culturally authentic cast.  It also seems as though each cast member is coached well as line delivery is mostly good and emotions are believable.  There are just some small errors here pertaining to over-practiced lines, but this is not enough to hold this section back.  In the end, this film is real standout in its time period.

This idea either needs to be remade or a newer, upgraded version needs to be created.  With a little more complexity and improved production quality, this could be a Hall of Fame worthy movie.  Regardless of all of this, Bamboo in Winter will always serve as an example of what can be done, even with a limited budget, if the film creators actually put care and thought into what they are doing.