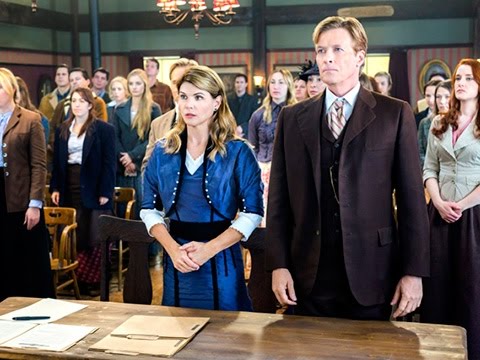 With the high-stakes trial against the corrupt Henry Gowen’s coal company brewing in Coal Valley, Elizabeth Thatcher, Jack Thornton, and Abigail Stanton all have other issues of their own to deal with.  Just as she and Jack begin growing closer together, Elizabeth feels a pull from her well-to-do family in Hamilton to come back them.  She soon feels her relationship with Jack become clouded by an old childhood friend.  Jack’s troublesome brother resurfaces and forms an ill-advised connection to Elizabeth’s family.  As Abigail discovers the hard truth about Bill Avery, she also receives word of a family member she never knew she had.  With new and sometimes frightening things on the horizon, the people of Coal Valley must band together and be prepared to face the unexpected.

Despite increased popularity and an obviously increased budget, Season 2 of When Calls the Heart does not gain any more ground in production quality.  For what it’s worth, it doesn’t lose any ground either.  Camera work is the same, including great angles and video quality.  Sound quality is the same, and unfortunately, so is the vanilla soundtrack.  The introduction of new surroundings—Hamilton—is both a blessing and a curse.  As they progress, series should change and do different things as to not get stuck in a location rut, but Hamilton also brings with it a license for Michael Landon Jr. and company to commit one of their favorite errors—pageantry and over-costuming.  Characters in both Coal Valley and Hamilton are transformed, almost into dolls.  It would be one thing to pose a distinction between rich city characters and frontier characters, but this does not occur.  In other issues, the editing does not improve in Season 2, as it is still equally choppy as Season 1.  In short, Landon Jr. and company once again fall into the typical Hallmark trap: pretty good production with overdone and unrealistic costuming.  This puts a damper on a series with huge potential.

The season begins on a strange note by discarding an otherwise interesting wildcard character and by quickly and easily resolving the coal mine trial without any real suspense or appreciation.  It’s like the writers were just trying to rush to something else, but it’s not clear what they were rushing to.  The Hamilton subplots are intriguing, but it’s hard to feel like there’s any real meaning or purpose behind them.  Season 2’s central plot and subplots not only water down the original Christian message, but they also feel shallow.  For the most part, the original characters remain mostly intact, but the newer characters are not developed as they should be.  Bill Avery perhaps has the most interesting character arc and shows potential for the next season.  However, Season 2 ends on a head-scratching note with a slightly forced cliff hanger that only seems to be begging Hallmark for a renewal.  In summary, while there was great potential in a Season 1 follow-up for further character development, Season 2 falls flat and does not meet expectations.

Despite a largely similar cast to Season 1, Season 2’s cast takes the foot off the brakes, so to speak, and seems to not try as hard as before.  Several actors and actresses, including Erin Krakow and most of the Hamilton characters, seem to be overplaying their roles and forcing emotion.  Some actors and actresses remain the same, but the biggest issue here is that no one improves.  This should be the case in a television series.

Within the season, Season 2 is fairly consistent as far as internal subplots.  It is hard to discern its overall arc except for indecision.  However, the relationship between Season 1 and Season 2 is disjointed.  The increased budget popularity seemed to make the writers think that they did not need to preserve the honest originality of Season 1, because they didn’t.  This was a disappointment.

There was much anticipation and expectations following the unprecedented success of When Calls the Heart, Season 1, yet Season 2 failed to meet these.  As a season itself, it was about average, and would have been fine as another pilot season.  But sophomore seasons should build of the successes of the first, eliminate mistakes, and overall improve, not start over at square one.  The writers have given themselves an interesting choice and framework to work within for Season 3, and it will be interesting see how it goes.  This concept has loads of potential in its corner—time will tell how it plays out.