It’s almost the end of time, and two families are full of strife. They are facing some serious challenges as the world starts to spin out of control. Will they be able to remember their faith before it’s too late?

There is unfortunately nothing positive to note in this section. Audio quality is terrible due to very loud background noises in both indoor and outdoor scenes, and there is basically no soundtrack. Outside scenes are too bright while inside scenes are poorly lit. Camera work and video quality are both inconsistent. The sets, locations, and props are quite cheap. Further, editing is very choppy, which rounds out a sub-par effort.

In this narrative, the writers present one thing after the next, dumping disconnected subplots upon the audience. This leads to empty characters and unsubstantial dialogue. The plot includes a juvenile view of Christianity, suggesting that people’s problems can be magically fixed. There is overall no purpose to this story, and it’s basically two different films shoved together. As such, there are no unifying themes other than mindlessness and purposelessness. In the end, the conclusion is nonsensical, leaving nothing for the viewers to learn or believe in. This lack of potential produces a zero-point rating for this section.

Between unconvincing acting and bouts of yelling and screaming, the forceful performances in this movie are basically unbearable. Many cast members recite lines without conviction or realistic emotions. Further, one-take scenes have mistaken lines. Thus, this rounds out a no-potential effort.

It remains incredibly unclear how and why films like Leading to Revelation continue getting made. Screenplays like these accomplish nothing except to further tarnish the reputation of Christian media. There is no purpose to these types of creations, so money needs to stop being spent on them.

Carrie Saunders just wants to live her normal life as a businesswoman, but her recurring nightmares about a missing girl continue to haunt her night after night. Her visions cloud her judgment and cause her to begin to suspect her husband of wrongdoing. Police refuse to believe her tales, so she decides to investigate the matter on her own. Little does she know that the wild ride she’s about to experience will change her life forever.

At first, the production of Dawn begins in a rocky manner as evidenced by inconsistent camera work and lighting and some slight background sounds. However, the video quality is stable throughout, and the sets, locations, and props are mostly fine. The camera work does seem to improve as the film proceeds, and it becomes quite professional in the end. Another inconsistent area is the soundtrack since it’s generic in some parts yet quite good in others. Further, one other drawback is somewhat dizzying and repetitive nature of some of the psychological sequences, but this is also sometimes an asset. In the end, the editing is good, and the production is a mixed bag that’s overall above average.

Dawn dares to try something extremely different in Christian film as it takes on a very unique plot that’s often hard to quantify yet intriguing at the same time. The attempts at extreme creativity are well-noted, even if they can get a bit head-scratching at times. Although some may not like it, it’s good that the Christian elements of Dawn aren’t too in-your-face as it tries to primarily rely on good mystery plot content. However, the storyline does have a few flaws in that the characters could be a bit more developed than they are, which means the time could have been better spent on this venture rather than on repetition of key elements the audience is shown over and over again. Still, the characters are fairly good as they are, even if the villain characters are slight strawmen. The psychological elements of the plot are interesting, but they could use a bit more explanation as to why they are occurring. However, the ending isn’t quite expected, and Dawn is an overall very creative attempt at a complex mystery plot culminating with an actually effective climax that’s built throughout the entirety of the film. This is finally a real suspense plot worth watching, but it would be even better as a remake or a similar replication.

On the whole, the acting of Dawn is fine with only a few minor errors to contend with. There were definitely some opportunities for improved emotional delivery and more dynamic line delivery. However, the cast does enough to make this an above average performance, which rounds out an overall above average film that’s worth your time.

The potential that this creative team showed is very encouraging because it could be the start of something great for them. It’s highly possible that streaming series are in their future if they are allowed to collaborate with larger budgets and tighter writing. What we need is more psychological suspense and mystery stories, and seeing these in the context of Christian series would be awesome, so we can’t wait to see what they have planned next. 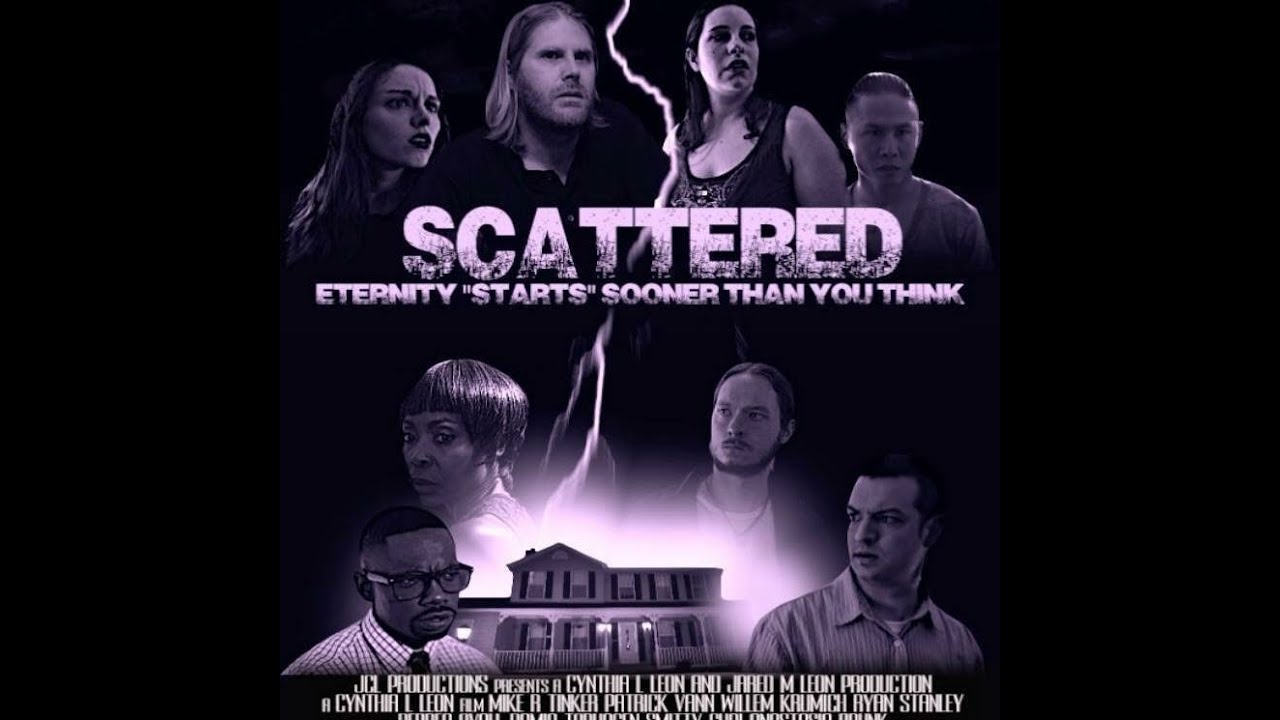 When a group of friends gathers at a mutual friend’s house to celebrate her graduation from law school and upcoming bar exam, none of them could have anticipated or predicted what would happen to them that night.  Some of them are frustrated that their old friend has become a Christian and refuses to get high with them, so they decide to have their own ‘party’ secretly in her house.  However, what they do not know is that supernatural forces beyond their control are at work and they will be taken for the psychological ride of their lives—whether they want to or not.

Much like The Basement, Scattered begins with very poor production quality, including too many tight, awkward camera angles and too much shaking camera work for dramatic effects.  Though video and audio quality are relatively stable throughout, there is really only one set in this film with no outside locations except for within flashbacks.  Props are mostly fine throughout, but there are some cheesy ‘horror’ special effects that really need to be eliminated.  There are also too many choppy cuts and transitions, as well as a lot of disorienting editing to try to add to the psychological effect.  However, relatively halfway through the film, a switch if flipped and it suddenly becomes a respectable production.  Thus, it ends up average in the end, but that is not all that changes throughout this film.

Scattered begins as annoying as The Basement was throughout, including a lot of stupid and mindless dialogue that makes non-Christian characters very bad and Christian characters too good.  It’s also hard to keep up with all the characters at first as the first half of the plot really has no coherent thought or direction.  However, it is clear that the first half is trying to kick the can down the road to get to the big twist this movie hinges upon, however, this is not done in a very good fashion.  The tone and premise of the first half is very strange and off-putting, including ridiculous horror elements.  Though this part drags on way too long due to wasted, pointless conversations and empty scenes, the middle of the story totally flips the script and suddenly becomes the best Christian horror plot written to date.  Flashbacks are used very effectively to suddenly build the characters into real people and the ‘horror’ elements become justified and actually realistic.  The plot is not afraid to take on realistic gritty issues that people endure and suddenly makes its characters more gray rather than so black and white.  Thus, the ending is interesting and actually makes one want to see more.

Like the other elements of the film, the acting is quite bad at first.  The makeup is a standout problem in the beginning.  A lot of the cast members are trying way too hard at first, including forceful line delivery and wooden emotions.  However, even these issues demonstrate improvement as things completely change in the middle of the film.  The difference between the two halves is so stark that one has to wonder if the creative team completely changed in the middle.

Scattered bears a strong resemblance to Pendragon as a rare film that changes and improves throughout and is actually sustained by a strong and unique plot idea.  Yet the question still remains: since they showed they could improve, would it really have been that hard to go back and fix the beginning?  Sure, it would have taken more time, but think of the impact this film could have had.  This is likely the only good Christian horror concept on the market right now, and it most definitely needs to be reused in some way.  After the debacle of The Basement and the first half of this film, it seemed like JCL Production was just another failed venture, but with the total turnaround in Scattered, they have demonstrated that there is more to them than meets the eye.  Thus, it will be very interesting see what they can come up with next.