Ronald Mitchell lays dying in his own bed as his organs are shutting down, so home healthcare nurse Julie is called upon to make him comfortable as he passes into the next life.  However, she doesn’t just want to make her patients comfortable—she wants to leave a lasting difference on their lives.  Ron is all alone, so Julie sets out to find his long-lost children, whom he gave up for adoption.  Little does she know that the search will lead her to surprising results.

As usual for Faith House’s newer productions, there are a few good production elements, but not enough.  Video quality is fine, as is audio quality, yet there is some randomly shaky camera work, and the soundtrack is Faith House’s usual silliness.  Sets, locations, and props are okay, but they are very limited and cheap.  Lighting is also sometimes an issue.  Furthermore, the editing is poor, including lagging scenes and awkward fade-outs.  Basically, at the rate that Faith House puts out these dumb movies, there’s no way they can be quality.

It never fails that the Faith House team can come with a childish, silly story that’s based on a flimsy premise and unrealistic occurrences.  Do they even research the situations they want to portray in film before making them?  Their stories are based too much on coincidences and leaps in logic, not to mention the fact that the characters therein are ridiculous.  Faith House also writes the strangest dialogue, and all of these goofy elements are present in A Time for Heaven.  There is no sense of reality in the pursuit of forcing a childish conclusion with a cheap Christian message.  Basically, much like Before All Others and their other wonders, A Time for Heaven is another pointless film that never needed to be made.

Constantly casting Mitch Etter and Julie Van Lith in your films is not a good idea if you want to have a good cast.  Not only is this cast very small, but it’s not really any good.  Every cast member just does their own thing with no much direction.  There are quite a few obvious line errors and emotions are laughable.  In the end, this is once again a newer film that had no reason to be released.

Though we know that outfits like The Asylum are purposely creating parody films, it’s very difficult to know if companies like Faith House, Stronger Foundation, Tender Shoot, etc., are actually serious.  Films like this one are funny for all the wrong reasons and only further serve to continually muddy the waters of the Christian film market.  Whoever is funding these nonsense films needs to seriously stop and demand some quality. 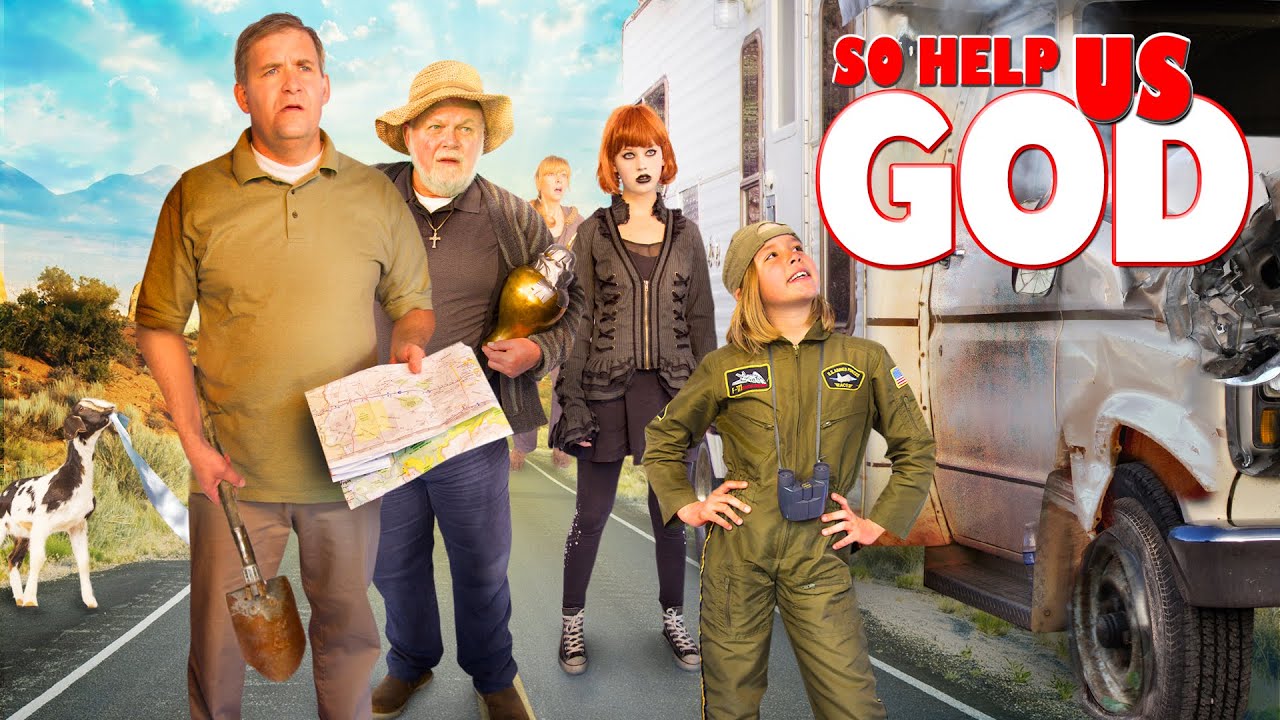 When Eddy gets laid off from Fazzle Glue, whom he has worked for over twenty years, his self-parody gothic daughter decides that the only logical thing to do is to take Grandpa Will to the magical tree where he used to go with Eddy’s mother so Grandpa Will can bury her ashes under it.  Yeah, he carries her ashes around in an urn all the time.  So they decide to take Eddy’s wife, who somehow has Parkinson’s disease, and both annoying daughters along for an RV trip into the middle of nowhere.  And the youngest daughter brought her pet goat along, naturally.  Come along for a goofy ride you’ll never forget!

Surprisingly, So Help Us God is an improvement from past Faith House productions, but that’s not really saying much.  At least video quality is clear and camera work is somewhat improved.  Audio quality is still a problem, however, and this film has the goofiest soundtrack ever.  Sets and locations are on the rise, if you count having a few buildings besides the RV.  Also, the flashbacks have an unusually different quality about them for some reason.  But as usual for Faith House, there is no editing present—all content is included, which isn’t much to begin with.  In the end, this is Faith House’s best production to date, which really shows how much of a mess they are.

Similarly, this is the most complex plot Faith House has to offer, but once again, this is not saying much, as it still makes no sense.  The entirety of the plot can be found in the trailer.  Most of the comedy is very corny and forced, and thus, it falls flat.  This story is funny for all the wrong reasons.  The premise and the characters therein are highly eccentric, seemingly on purpose.  It wastes tons of time on silly asides and typical activities of daily living, not to mention long and confusing flashbacks that only convolute things.  Finally, everything is easily and juvenilely fixed in the end, leaving the audience feeling like they just wasted their time.

Besides some typical Faith House cast members, we see a few additions in So Help Us God, even though they are all overall wacky and self-parody.  Though they can sometimes be funny and entertaining, there is too much shouting and mumbling.  Emotions seem childish.  Basically, another standard Faith House acting job.

This title is highly apropos as we conclude our Faith House binge.  Faith House certainly needs help from a divine source if they are going to continue to roll out silly and nonsensical films.  For that matter, the whole of Christian entertainment needs divine intervention if these are things that are being made and are being marketed as accessible Christian film.  What are non-Christians and sensible Christians supposed to think of this childishness?  There is such a thing as a good comedy, and there’s also unfortunately such a thing as an unintentional comedy.  Unfortunately, So Help Us God is more of the latter.  But at least we’re done with Faith House…for now…