After becoming disillusioned with his job after a failed surgery, Nathan Andrews decides it’s time to take some time off of work to go back to his hometown to see his dad.  But he decides to hide the true nature of his visit as he goes around town helping people.  He stumbles across a random woman several times, and the two of them fall madly in love.  Nathan also meets back up with his lawyer friend who helped him buy his dying mother a pair of shoes, which are now missing.  Will Nathan be able to make peace with his past and reconcile his work over the holidays?

Much like the preceding film, The Christmas Shoes, The Christmas Blessing is basically a pristine production with no real errors.  Video quality, camera work, and audio quality are all fine.  The soundtrack is fairly typical, but the sets, locations, and props are good, even if there are a lot of Christmas decorations.  Finally, the editing is standard with no real errors.  It’s rare that we see a perfect production, but at least in this era, Hallmark put their full efforts towards this front.

Also much like the film that comes before this one, The Christmas Blessing is almost a totally pointless plot.  It has a predictable return-to-hometown to stumble upon a random romance at Christmas spiel, all of which seem very forced and manufactured.  This is evident in very obvious and programmed dialogue, which in turn creates one-dimensional characters that only serve as stand-ins for the plot’s inevitable purpose.  There is also a dose of a buying-a-building subplot here, along with a troubled character subplot.  With all of this going on, the progression is very rushed and based on coincidences in route to a predictable conclusion before the television time is up.  The Christian message is also very muted and mostly only based on the previous film.  Basically, the only reason to make these sorts of films is just to have more content to play on TV.

Though this cast is mostly professional, in keeping with Hallmark’s usual standards, there are some moments when the cast members seem to be trying too hard.  Sometimes lines come off as overly practiced, and emotions can sometimes be overly ‘interested.’  But on the whole, this section is above average and is on industry standard.

These two films are made for the sake of having Christmas films based on a recognizable Christian song in order to grab the attention of some audiences for a short amount of time.  In the grand scheme of things, movies like this are extremely forgettable and will be lost in time.  We need films that are dynamic and timeless, not more mindless holiday fodder. 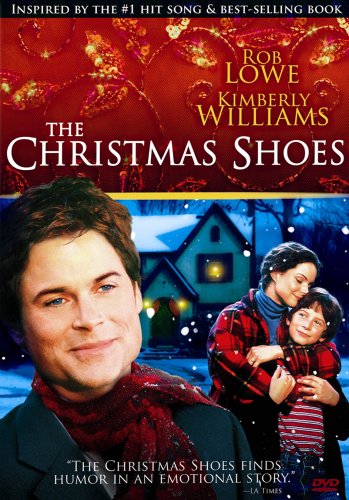 With his mother dying of cancer at Christmastime, Nathan Andrews just wants to buy his mother one last present before she goes to heaven.  However, his family doesn’t have enough money do to the healthcare treatments.  His path crosses with disgruntled lawyer Robert Layton, who wants nothing to do with Christmas since his marriage and family are seemingly falling apart.  Will Rob take the opportunity to spread holiday cheer before it’s too late for Nathan’s mom?

As a Hallmark production in their movie ‘heyday,’ The Christmas Shoes is basically a textbook example of a professional one.  Though many elements of it are typical, including plenty of Christmas décor and props, there are no real errors to point out here, which is a rarity.  Video quality, camera work, and audio quality are all predictably good.  The soundtrack is a bit too Christmasy, but what it can be expected.  Sets and locations and realistic and professional.  Editing is also fine.  Overall, this is certainly a production to be proud of.

As a Hallmark movie based on a popular Christian Christmas song, one can see the obvious pitfalls here.  For one, the story is told in narration before it even begins.  Even so, it is still a typical Christmas story about a busy and cold character who hates Christmas for some reason but learns to care again for some reason or another.  This is also mixed in with a diseased character at Christmastime, plus a literal save the farm plot to boot.  Also, don’t forget the Christmas pageant!  Overall, this is a touching idea, and the characters and their struggles can somewhat be related to.  However, they still tend to fit into their stereotypical and seemingly predetermined molds.  There are good issues raised about common family problems, but they are resolved way too easily.  This story fights being sappy and even plastic at times, which is unfortunate, because this could have been something.  In the end, many audiences will like this story, but it’s just one too many.

Once again, this section is highly professional and well-cast.  The only issues to raise here pertain to some minor drama and moment of yelling.  But on the whole, emotions are realistic, and lines are delivered well.  This rounds out an above-average effort of a film that many will enjoy.

Movies like this one are problematic because they are popular and have plenty of good elements.  However, they are also fairly limited in scope and creativity.  If a predictable storyline is going to be used, the least that can be done is to make the characters very deep and rich due to superb dialogue and an effective use of flashbacks.  However, Hallmark likely isn’t in the business of creativity, so carry on, I guess.