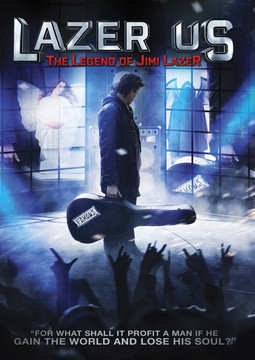 Lazer Us: The Legend of Jimi Lazer

In this strangely-titled film that appears to convey something about Lazarus, a guitarist named Jimi Lazer is depicted as he stumbles upon a magic guitar that gets him in contact with the Devil!  As a musician, Jimi wants riches and fame just like the next guy, so he sells his soul to the Old Liar.  Essentially, Lazer Us is a trippy, LSD-style drug trip from the 60s that has an unhealthy obsession with Satanism and tries to warn aspiring artists to stay away from Lucifer.  Unfortunately, the time spent on Satan is disproportionate, and the storyline is overall extremely confusing and hard to follow, which is why it landed here.

As a basically unknown new film from this year, Pocket Angel is in a category all by itself–almost rivaling The Rev for cartoonishness.  Apparently some reporter is assigned to a story in Mexico, so she takes her newly adopted son along.  Most of her lines are overdubbed in the most horrible way, and she comes off as a cruel parody of a Hispanic character.  Her son is kidnapped by the most childish cartoon villains you can dream of and held for random.  As a majority of the film consists of ridiculous sound effects from Lost in Silver Canyon, it’s easy to miss the creepy angel characters that peddle Pocket Angel figurines from a Christian bookstore to the characters.  Basically, this film is mostly inexplicable.

A Wish For Giants

When a girl who just contracted brain cancer is given a chance to have her wish fulfilled by a non-profit, she does what every girl would do and wishes to see Bigfoot.  The non-profit actually takes her seriously and assigns a summer intern to the case.  This film is full of boring and drab sequences that utilize terrible production quality.  There is also a lot of Bigfoot message-pushing and some vague reference to the Nephilim that are off-putting.  It goes without saying that the acting is basement-level deplorable.  As a whole, this movie is extremely strange and hard to follow, which is why it has found a home here.