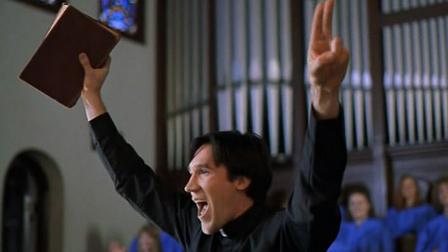 Michael Steele, a major movie star, slowly finds his life changing and being turned upside down as he tries to live the way he feels a Christian should live.  Nothing seems to work out and things only seem to get harder as he tries more to do what Jesus would do.  As his friends and coworkers call him crazy and shake their heads at what he is trying to do, Michael Steele finds himself wavering at times.  Will God really help him endure what he is going through?

If one good thing can be said for this unusual production, it’s that time and money were definitely spent on the sets, locations, and props.  However, not much else positive can be highlighted.  Camera work is quite shaky and video quality is quite grainy.  The soundtrack is bad enough without forcing us to listen to Randy Travis attempt to sing.  Also, there are a number of annoyingly bizzare special effects throughout, including constant flashing that seems to be unfriendly to the epileptic.  Finally, editing is poorly done, thus leaving the film too choppy and punctuated.  In the end, to be a film of this profile, production should have been far better than this.

Based on a novel by Bill Myers, this really is not the best book plot that could have been chosen to be placed on the big screen.  The plot structure is quite unusual and includes confusing flashbacks that don’t serve much purpose.  There is not real plot content as the story hops from one thing to the next.  The characters therein are very one-dimensional.  Unfortunately, this includes a strawman portrayal of non-Christian characters and a squeaky clean portrayal of Christian characters.  While there is some semblance of a good message lost in translation, all the problems of this story are fixed far too easily, thus making it all seem very trite and plastic.  In short, this movie was written for a vague idea that never materialized.

After watching The Wager, one has to wonder why Randy Travis is ever cast in a movie.  What exactly good acting qualities does he bring to the table.  But hey, on the bright side, this film contains Candace Cameron Bure’s best role to date, surprisingly enough.  Other cast members, such as Nancy Stafford, are not all that bad, but there is a lot of negative here that detracts from the positive—mostly pertaining to Randy Travis.

What is to be accomplished by these sorts of films?  With half-efforts evident in all three categories, what did the creators expect?  Do people expect that they can just barely try to put a movie together and then it will just be fine since it’s a Christian movie?  Thankfully, we are seeing less and less of these types of films today, so films like The Wager can provide a major lesson to today’s film makers: ‘big name’ cast members and writers do not automatically make for a great movie.  Great Christian movies take true effort and care and are unfortunately hard to come by.

Daniel did not anticipate arriving at his childhood foster home and being pressed into service, so to speak, to fill in for a sick storyteller.  Instead of go forward with his personal plans, he elects to stay and teach the struggling foster kids valuable life lessons through an adventure story about Billy Stone, a boy living in a mystical land who has a mission to assist his hurting father in discovering the legendary Lost Medallion that is rumored to grant the wishes of whomever wears it around their neck.  Blocked from taking part in the official search operation, Billy and his friend Allie launch their own search for the treasure.  They discover an inaccuracy in the official search’s measurements and believe they are close to finding it.  However, they will have to contend with an ancient enemy who wants the talisman for himself.

The Lost Medallion is inconsistent in a lot of ways, the production quality to start with.  It is a mix of professional and cheap production, oscillating from good camera work and video quality to cheap sets, props, and costuming.  On the surface, the film seems well produced, but there are some underlying issues that are to be expected from first-time adventure films.  Yet there are plenty of production points to be applauded, such as the successful filming of difficult action scenes.  There is some obvious CGI, but it is understandable.  Overall, the production of The Lost Medallion is its strongest factor.

This movie is a good idea in that it seeks to explore the action adventure and fantasy genres with a Christian-themed film.  There are some intriguing elements to the plot, but there are also parts that are not commendable.  For one, time travel plots are always problematic and should be avoided as a rule of thumb.  Going back and forth in time causes confusion and continuity errors than cannot be successfully reconciled.  In fantasy plots, it is also hard to avoid convenient plot devices that solve impossible problems, and Medallion falls into this trap.  There are some interesting small plot twists and minor suspense elements that work, but in this pursuit, quality dialogue and character development are discarded.  The protagonists are at least mostly flawed characters, but the villain is extremely cheesy.  The dialogue is cheap.  Most of the plot points are either understated or overstated.  In short, while this plot has more potential than many Christian plots, it still missed the mark.

Alex Kendrick is really the only good actor, and he has a minimal role.  Sammi Hanratty is forced into a role she doesn’t belong in, and the other teenage actors are not coached well.  Most lines are forced and emotional delivery falls flat.  Unfortunately, there are some Asian stereotypes that are reinforced through the acting.  In summary, this movie would not have been as bad if the acting was better.

Despite this negative review, Box Office Revolution sees plenty of potential in Bill Muir and his crew.  He has the tools necessary to succeed and could contribute greatly to Christian movies with different genres.  On most counts, The Lost Medallion is a good start for a first time filmmaker.  There are some definite issues to work through, but we anticipate Muir’s next release.

John Paul George always wanted to know about his father and his experiences in Vietnam, but he could never learn any detailed information about him.  Now, on the verge of getting married, he stumbles upon a misplaced box of his father’s things and discovers a lone letter that could clue John Paul in on some more information.  He begins to search for the sender of the letter, but is unsuccessful until he accidentally reaches a cryptic character that interests John Paul just enough to make him go and see him in person.  Once he finally meets his new acquaintance, the two decide to embark on a redemptive journey to reconcile both their pasts and their fathers’ memories.

PureFlix has improved over the years on production quality.  The camera work is decent and the sets seem pretty good.  The war scenes are the strongest parts of the movie, as they are actually not done in a cheesy manner.  The soundtrack is just average. However, the editing tends to be confusing.  Some scenes are wasted and drag on too long.  This is an improvement, but not quite there yet.

This plot would have been improved with more inclusion of Vietnam War scenes.  The historical characters needed to be better developed and the present-day characters needed to be less-emphasized.  The present day plot is erratic and random; one subplot is introduced and then discarded with no real explanation to its purpose.  Some dialogue and subplots seem to just fill time.  None of the characters are believable, especially Wayne.  Perhaps the worst of all is that one character uses the same actor over a nearly forty year timespan, without aging appropriately.  In short, as far as PureFlix movies go, the plot is business as usual.

PureFlix needs acting coaching, plain and simple.  David A. R. White’s attempt at comedy falls flat.  Kevin Downes is not cast into the appropriate character.  Candace Cameron Bure and Rebecca St. James seem like Christian celebrity tack-ons, with neither one serving any real purpose.  Stephen Baldwin is passable, as are the historical characters, making them the only possible elements here.

In summary, PureFlix has improved a hair from the usual ways.  The production quality has improved, but that’s about it.  A potentially meaningful plot was once again wasted and the acting was once again sub-par.  Fatherhood is an important topic, as is the Vietnam War, but both seem like extra additions rather than the main points.  Maybe next time things will improve.