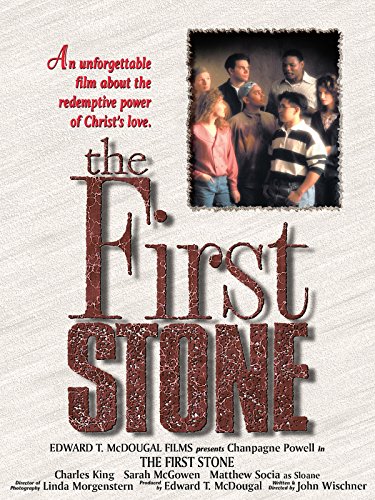 After Murrell is released from prison for serving time on drug charges, he is hired as a charity case at a local church as the janitor, even though there was opposition to him.  As he is quietly going about his work one day, he notices that the youth group has gotten out of control in the absence of the leader, so he decides to step in and teach the lesson for the day.  To everyone’s surprise, the kids respect him, so the head pastor makes a bold move to make Murrell the new youth leader.  The results of this move are surprising and unprecedented.

As an early 1990s production, The First Stone is fairly archaic, which is evidenced by blurry video quality and poor lighting.  While camera work is fine, the sets and locations are cheap.  The props are okay, even if they are a bit outdated.  There also really isn’t any editing to speak of as this film is shorter than most.  While this movie might have meant well, it has an overall feel that screams very old and worn out.  This one was definitely due an upgrade, but funding was likely hard to come by.

However, The First Stone is one of those rare instances in which the plot is much better than the production.  This movie tells an actually interesting story about problems in churches and in pastor’s families without white-washing it.  It contains realistic and flawed characters and exposes church secrets and broken family systems.  The circumstances therein are believable, and the dialogue is substantial enough to be interesting.  However, there are still some areas for improvement as this is basically an unfinished idea that didn’t get much funding.  The ending is unexpected and interesting, thus making this film somewhat worth your time.

Unfortunately, there are also some acting errors that hold this film back from being what it could be.  The cast members can be too stiff and stilted at times—they basically need some better coaching.  The costuming is old-fashioned, but it’s probably realistic for the time period.  Also, there is acting improvement throughout, as well as plenty of good moments, thus warranting an average score for this section.

You never know what random movies you might stumble upon.  Films like The First Stone are only halfway done, but they have potential to go further.  This movie is definitely worthy of a remake, but it’s unlikely to happen due to the age of it.  Perhaps someone can use the ideas therein to create a truly interesting small church film one day.