Mary Tobin loves her family’s Christmas Lodge out in the country, away from the big city, but with her grandfather dying, she is told by the lodger’s caretaker that the family business is in trouble if thing don’t turn around fast.  Mary drags her city boyfriend out to the lodge, who hates it there, which prompts Mary to begin falling for the caretaker of the lodge, since he likes the outdoors and stuff.  Will they be able to save the lodge together?

As usual for this type of film, Christmas Lodge has a typically fine production.  This include good video and audio quality, even though there are some random moments of shaky camera work.  The soundtrack is fairly standard.  Sets and locations are mostly limited to a handful of options, perhaps due to the plot’s limited scope.  Props are fine, however, and the editing is surprisingly okay.  In the end, Christmas Lodge is a very run-of-the-mill, standard production that is commonplace in the Christmas genre.

As if this plot idea has never been done before, here is another go at it!  It is a predictable return the hometown plot to find a forced romance in the hometown instead of the alternative yet unreasonable ‘city’ relationship storyline.  Also, a save the bed and breakfast plot is shoved into it as well, along with some typical holiday stuff.  Though there is a lot of stereotypical hometown dialogue, and though the characters are basically flat, there are some attempts here to at least make them realistic.  Also, though this is a slightly more realistic version of this plot idea, everything revolves around the lodge and is much too formulaic.  The Christian message is vague, and there are too many cheesy romantic conventions, including a juvenile conflict that is fixed in the last five minutes.  At this point, all we can ask is how many more of these will be made?

Surprisingly, the acting is the strongest point of this film.  The cast members appear to be comfortable in their roles and are definitely above average in their performances.  There are just some minor errors to point out, mostly due to some underwhelming performances.  However, it must be considered that there was not much content to work with here.  Considering this, the acting work is great.

Christmas Lodge is just a very safe and typical holiday film that plays on the television in the background.  On paper, it is a strong film, but it is certainly not a dynamic one.  If you’re going to use this worn out plot line, there are still better things you can do with it, such as craft deep and complex characters through realistic and character-building dialogue.  However, it’s also easy to settle for another stock Christmas movie.

When a back road closes due to a snow storm, eight people find themselves trapped in an abandoned church.  They include a priest who has left the ministry because he feels distant from God after his wife died, an EMT who wants to be a doctor, a wealthy married couple having relational and financial issues, a newlywed couple trying to start their new life together, and a couple on the brink of divorce.  As the storm rages, they all find common ground with their issues and discover that there is hope for each one of them.

While Christmas Miracle is a generally average production, it is not without its issues.  Video quality is pretty clear and the camera work is fairly good.  Sets and locations are okay, even though it mostly takes place in a dark church.  Audio quality is fine, but the soundtrack is too bizarre.  Otherwise, there are numerous editing problems.  There is too much reused footage and too many flat and empty scenes.  It seems like some scenes are designed to pad the runtime and drag out the movie.  Essentially, while it’s not the worst production in the world, Christmas Miracle still needs a lot of help.

While the idea behind this plot is slightly interesting, there are just too many errors here that cover it up.  The storyline brings up mostly realistic and pertinent issues that everyday people face, but they are all portrayed in simplistic and sometimes petty ways.  The plot does not hold the attention very well as silly problems are rehashed and delayed to suit the runtime.  Though we spend a lot of time hearing these characters talk, we don’t get to know them very well.  They are extremely wooden and one-dimensional, sometimes repeating themselves throughout the film for emphasis.  Though there is a lot of dialogue, it is empty and stock.  Basically, Christmas Miracle is your average boring and slow plotline that has a small amount of potential that it does not cultivate.

To top things off, this is a very poor casting job.  While they are not necessarily bad actors and actresses, they severely lack quality acting coaching.  Their line delivery is possible the fastest we have ever witnessed in a film.  Their lines are forced and overly practiced, as are their emotions.  Since this film is entirely reliant on them, it really hurts its overall case.

It’s very hard to know what the Nasser Group is trying to do.  It usually seems like they have potential as film makers, but they always have things in their movies that trip them up.  While this is a very generic Christmas plot, it could have been better than this.  It’s not disingenuous like some; it’s just a typical low quality film.  I wonder if there will be a point in time when these types of films are no longer made like this.  Maybe that’s a Christmas miracle to wait for (lol). 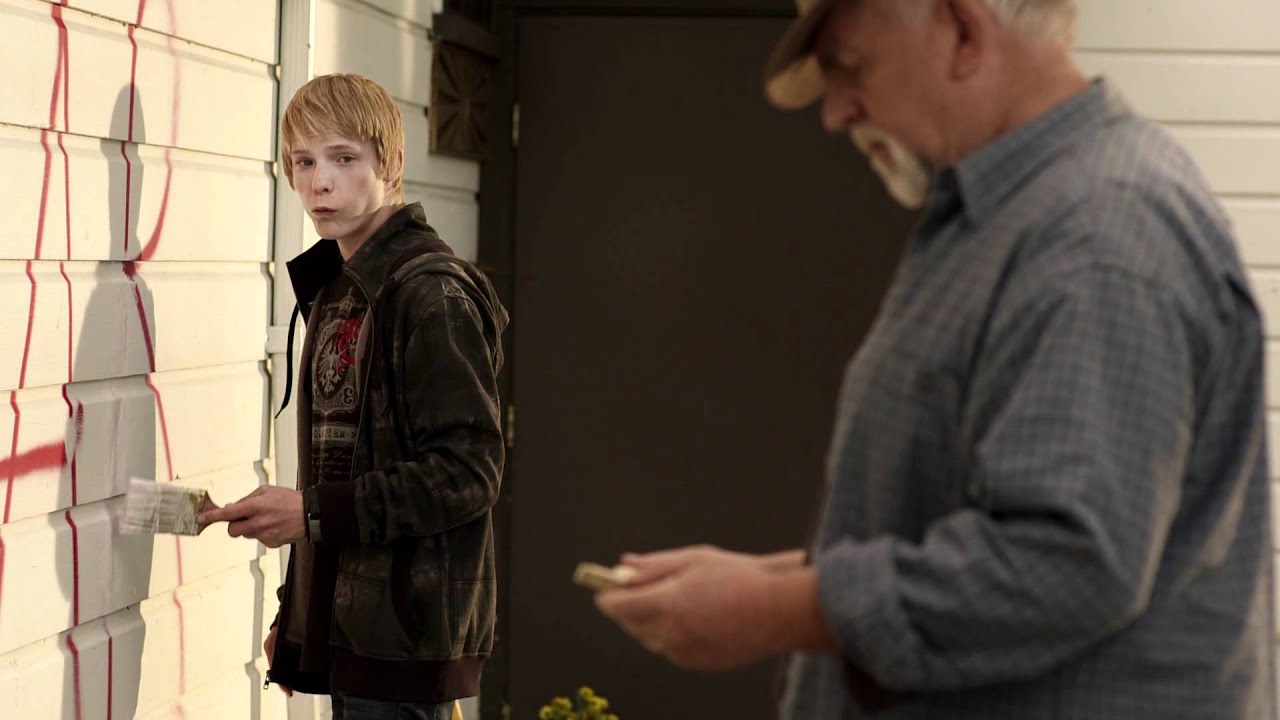 When Matthew Stevenson vandalizes a church out of anger over his parents’ pending divorce, some are ready to press charges against him.  But when the woodcarver, Ernest Otto, whose work he damaged learns about the boy, he decides to take a different route.  Otto invites Matthew to come help him in his wood working business as payment for what he did.  Though reluctant at first, Matthew is glad to finally have someone to talk over about his family’s struggles.  As their relationship grows, things begin to change for Matthew.  He must learn that Christianity is more than just words, and that those who claim the name of Christ must ask themselves ‘What would Jesus do?’

What a difference a third movie makes (sometimes).  Gone are shaky camera work, dark scenes, and inconsistent audio quality.  Instead, The Woodcarver offers a more palatable production experience, one we wish every independent Christian film would at least try to offer.  The sets and locations are down to earth and realistic, albeit slightly limited.  The surroundings are mostly realistic.  The soundtrack isn’t much to get excited about, but this is a minor issue.  There are a handful of minor errors that keep this production from being all that it could be, but above average production is a huge accomplishment for this odd film franchise.  We always wish it were better, but sometimes we can’t ask for much more than this.

In a complete detour from the previous installments in this trilogy, The Woodcarver introduces a completely new cast of characters and finally dispenses with ‘the drifter’.  The same underlying concept of ‘What would Jesus do?’ is still present, yet it is ten times more meaningful than before.  Rather than multiple meandering and meaningless subplots, this film focuses on one meaningful subplot about a struggling family, something many viewers can relate with.  The characters are more relatable than the other characters in this trilogy, even though the plot is little bit simplistic.  It’s a shame that the characters are not deeper than they are since there are few of them, but effort was certainly put into this plot.  The dialogue is pretty average, but in the Christian movie world, when there’s no glaring errors, that’s great.  Overall, we would have liked to see a deeper, more meaningful plot, but sometimes sticking with the safe route of avoiding huge mistakes in the way to go.

Trading John Schneider for John Ratzenberger paid off.  Though it’s small, this cast really isn’t half bad.  Sometimes emotional delivery is a little off, but it is better more than not.  Line delivery is solid throughout.  There is an obvious presence of acting coaching here, which is a huge change from the rest of the trilogy.  Overall, this is a much better job.

As we mentioned before, wouldn’t it have been much better to save the resources spent on the first two films and put them toward this one film to make it the best it could be?  Couldn’t have one of two of the better subplots from the previous two films joined this film’s plot to create a potential Hall of Fame work?  Which is better, two terrible movies and one average one or one great movie?  We maintain that quality is always better than quantity.  Sure, we need lots of Christian movies on the market, but just think of a world where movies like The Woodcarver were the norm, not movies like the first two WWJD debacles.  That would be truly something to behold.