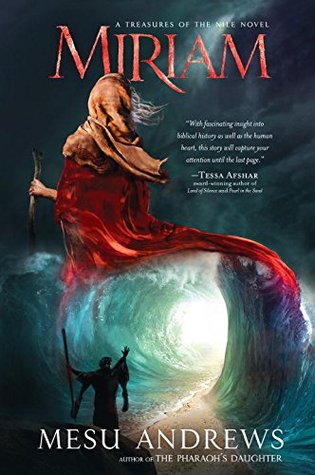 Author’s Note: We were provided with a review copy of this novel in exchange for a fair and honest review.

Miriam is one of Mesu Andrews classic novels, written in the early days of her career. Andrews high quality storyline and masterful character development make for an enjoyable read that I would recommend to others. This novel tells the story of Miriam, the sister of Moses and Aaron, and the son of her heart, Eleazar. Miriam never married because no man’s love could live up to the perfect love of El-Shaddai. She has filled her days by being a healer; by caring for the physical needs of her fellow Israelite slaves. Her family has always revered her as a prophetess of sorts, and the Egyptians respect her parents because of their unusually long lives. In short, she has a good life when compared to most slaves, and not much has changed of the eighty-plus years of her existence. However, that will soon change. When her long-lost brother Moses returns from Midian claiming that Yahweh has called him to lead the Israelites out of Israel, she and all the other slaves are suspicious…until he performs miracles that only God could have orchestrated. Everyone quickly turns to Moses as leader and prophet…and Miriam is left confused as to the purpose of her life…and more than a bit jealous. She struggles to feel the presence of God as she used to, and is angry that God did not choose her to lead. Will Miriam overcome her jealously and accept Yahweh’s plans? To answer this question, read the book! (spoiler) The main issue I had with the plot was Miriam’s eventual marriage, which seems silly and unnecessary. Additionally, Eleazar and his wife have a bit of a rocky storyline that needed further development – or their own novel. Despite the flaws, this is a unique, well-done story that should definitely be made into a Christian film. Therefore, Andrews earns an above average score in this section.

As previously mentioned, the character development in Miriam is above par and contains many strengths. First, I appreciated that all the characters were the correct Biblical age. In most portrayals of the story of Moses, he is either young or middle-aged. People forget that he, Miriam, and Aaron were all elderly when their journey out of Egypt began. Secondly, Miriam is a strong character because she has a unique, fully developed personality, along with strengths, weaknesses, and a clearly defined spiritual gift. Third, Moses is a good, imperfect character who struggles with his calling to be a leader because it does not come naturally. Finally, the relationship between Aaron and his wife is well-done and realistic. In comparison, Eleazar is a good idea because he struggles to submit to God and surrender his need for control. However, he is two-dimensional and needs depth and flashbacks to be well-developed. Additionally, the minor characters are not always well-integrated into the story. Because the strengths of the novel outweigh the weaknesses, Andrews earns an above average score in this section as well.

Andrews has always had a certain talent for inserting creative and original elements into her novels, and this one is no different. She earns a half point in creativity for her creative characters, and a half point in originality for her unique portrayal of the story of Moses. To date, I have not read a better portrayal of this Biblical hero, therefore, this should most certainly be made into a Christian film. A new face in the Christian filmmaking world would do well with this story, for all the key elements are already there. Finally, I must insist that Andrews work directly with the screenwriter on the screenplay. Readers, this is a Biblical fiction novel that you can recommend to friends and family.